Steve O´Dwyer won the first tournament in this year´s ESPT/EPT Barcelona series after being the last player to enter the Neymar Jr Charity “Home Game”. 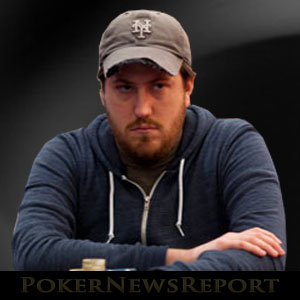 Steve O´Dwyer won the first tournament in this year´s ESPT/EPT Barcelona series after being the last player to enter the Neymar Jr Charity “Home Game”.

The ESPT/EPT Barcelona kicked off yesterday – a fiesta of seventy-one poker tournaments that will continue until August 30th and that will see most of Europe´s leading poker players competing for millions of €uros in prize money.

The first day´s action consisted of two super-satellites into the Estrellas Main Event and a “home game” supporting the Neymar Jr Charity that raises funds for the underprivileged in the Brazilian soccer star´s home town of Sao Paulo.

The €120 buy-in charity event attracted fifty-nine players who were competing for a variety of prizes that included a seat in the EPT Barcelona Main Event (worth €5,300), two seats in the Estrellas Main Event (each worth €1,100) tickets to FC Barcelona soccer matches and more.

“I Only Came Out for a Walk”

The last of the fifty-nine players to enter was Steve O´Dwyer. O´Dwyer had only been in the Casino de Barcelona to observe the set-up for the rest of the series, and he was cajoled into entering the tournament by PokerStars Pro player Fatima Moreira de Melo.

Three hours later the final table was set, with O´Dwyer having a substantial chip advantage over his opponents. On his way to the final table, O´Dwyer had collected a couple of bounty prizes for knocking out Friend of Team PokerStars Felipe “Mojave” Ramos and – somewhat ironically – Fatima Moreira de Melo.

O´Dwyer´s roll continued, and he was responsible for busting out the first five players at the final table – including two in one hand with a Full House of Jacks over Threes against David Longmate´s Full House of Threes over Sixes and Kaleb Goad´s top Pair.

Steve O´Dwyer has had a very good year so far, even by his impeccable standards. The winner of the $100,000 Super Higher Roller at the PokerStars Caribbean Adventure (for $1,872,850) was followed by victory in a side event at the Macau Poker Cup and a win in the Fienna Grand Slam in Helsinki just a couple of weeks ago.

With a seat to the EPT Main Event already in his pocket and the promise of a nice ROI, further events on O´Dwyer´s radar are likely to include the €50,000 buy-in Super High Roller that gets underway on Saturday, the €25,000 buy-in One-Day High Roller scheduled for next Tuesday and – if he is not still involved in the EPT Barcelona Main Event – the €10,000 High Roller that takes place between August 28th and August 30th.

If Steve O´Dwyer wanders into the Casino de Barcelona this afternoon, he will be spoilt for choice. As well as a couple of super-satellites for later events, the schedule includes Day 1A of the Estrellas Main Event, Day 1A of the Barcelona Poker Cup, three NL Hold´em Turbo tournaments with buy-ins ranging from €500 to €2,000 and a 5,000 buy-in Razz event.

A quick look through O´Dwyer´s Hendon Mob database reveals that he has never cashed in a Razz tournament before. We wonder if he will be tempted?