The final table for the UKIPT Isle of Man Main Event was set last night, with PokerStars qualifier Jamie O´Connor heading a fascinating and well-stacked field. 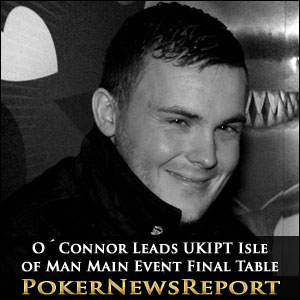 The final table for the UKIPT Isle of Man Main Event was set last night, with PokerStars qualifier Jamie O´Connor heading a fascinating and well-stacked field.

Thirty players returned to the Villa Marina on the Isle of Man yesterday to fight for a seat at the UKIPT Isle of Main Event final table and, after six levels of action, just eight remain – headed by PokerStars qualifier Jamie O´Connor who endured a roller-coaster day against the two players closest to him in the chip counts – Duncan McLellan and Daniel Stacey.

McLellan had gone into Day 3 of the PokerStars UKIPT Isle of man Main Event as chip leader, but Daniel Stacey raced to the top of the leaderboard as the short-stacked players failed to get the double-ups they needed, and fell to Stacey superior hands. Jamie O´Connor gave pursuit after doubling up against McLellan K♠ K♥ > A♣ 10♥, and then McLellan doubled up against Stacey A♥ K♠ > A♦ Q♦ to leave the three players closely matched overnight.

Staff and Stars in the Chasing Pack

Among the five other players at the final table are a member of PokerStars staff – Christopher Jonat – and one of the company´s sponsored Sportstars – Fatima Moreira de Melo. Jonat is a former PokerStars grinder, who moved over to work behind the screens, and who is now in charge of managing Team PokerStars Online He was lucky to stay in the event when spiking an Ace (A♣ J♠ > 9♦ 9♥) to double up against Jamie O´Connor, but finished the night by busting out Alexander Schilt (10♣ 10♠ > 3♣ 3♠) to set the final table.

Fatima Moreira de Melo had started Day 3 second in chips behind McLellan, but had been card-dead throughout the day and seated on the right of the aggressive Daniel Stacey. Eventually she was forced to shove her dwindling stack with pocket Deuces, and rivered a set to cripple Dahe Liu (A♥ Q♦), who was bust from the tournament soon after.

Richard Milne, Adam Topping and Harry Lodge complete the UKIPT Isle of Man Final Table after each enjoyed a successful day at the tables – Harry Lodge will in particular remember Day 3 of the UKIPT Isle of Man Main Event after busting out poker legend Barry Greenstein J♦ J♣ > A♦ J♠, while Richard Milne halted Sam Razavi´s attempt at a remarkable comeback (A♥ A♦ > K♥ J♣) after the former UKIPT Cork winner had recovered from having just one Big Blind.

Adam Topping will go into the final table with one of the smaller stacks, but survived numerous tricky moments to stay alive in the event – not least when flopping the J♣ when well behind with Q♥ J♥ against Harry Lodge´s A♦ Q♠ – and with blinds of 12,000/24,000 (ante 3,000 chips) when the final table gets underway this afternoon, Topping has plenty of chips in reserve to pick his moments carefully.