The line-up for the upcoming World Poker Tour (WPT) Bay 101 Shooting Stars championship has been announced – and it’s one heck of a stellar-packed list. 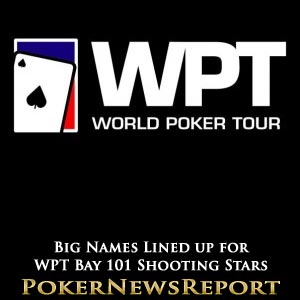 The line-up for the upcoming World Poker Tour (WPT) Bay 101 Shooting Stars championship has been announced – and it’s one heck of a stellar-packed list.

If those nine superstars are not enough to convince you that this will likely be the most impressive line-up you’ll see all year, then consider some of the other big-name poker pros involved.

All those previously named will, of course, have a $5,000 bounty on their heads when the action kicks off at the Bay 101 Casino on Monday, March 5, and ends on Friday the ninth.

In total, 49 pros in the field will be worth $5,000 to the player who knocks them out, and also includes the likes of Allen Bari, Freddy Deeb, Andy Frankenberger, Matt Giannetti, Jennifer Harman, Maria Ho, John Juanda, Kathy Liebert, Dwyte Pilgrim and David ‘Chino’ Rheem.

As well as the bounties, there is a $10,000 bonus up for grabs for the chip leaders after Day 1a and Day 1b, so there is plenty on offer – even for those who don’t make the money.

New York State’s Sternberg picked up $1,039,000 for taking down the event last March in San Jose after defeating fellow American Steven Kelly in their heads-up battle.

The runner-up, from California, left with a nice little bundle of cash, too, though, with Kelly pocketing $595,300, while Las Vegas-based Mike ‘The Mouth’ Matusow earned $369,800 for securing third place.

Alan Sternberg Back to Defend Title