Now You Win More When You Play PKOs at Party Poker

From Sunday 6th May, Party Poker will no longer charge a rake on the bounty element of Progressive Knockout tournaments (PKOs). Rather than reducing the total buy-in, the site will be increasing the amount of the bounty on each player´s head so that, when you knock another player out, you will win more cash. 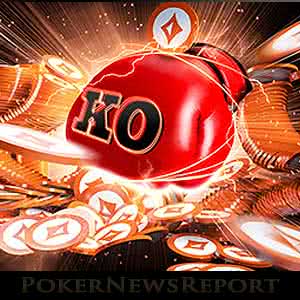 From Sunday 6th May, Party Poker will no longer charge a rake on the bounty element of Progressive Knockout tournaments (PKOs). Rather than reducing the total buy-in, the site will be increasing the amount of the bounty on each player´s head so that, when you knock another player out, you will win more cash.

Progressive Knockouts feature heavily in Party Poker´s tournament schedule. Each week, the site hosts more than 350 PKO tournaments worth more than $4 million in prize money. Although the tournaments are popular, paying a rake on the bounty element of the buy-in has been a contentious issue for years – not just at Party Poker, but at every online poker site.

At the moment, if you were to enter a Progressive Knockout tournament with an $11.00 buy-in, $5.00 goes into the prize pool, $5.00 is the starting bounty on your head, and the other $1.00 is the rake paid to Party Poker. From Sunday 6th May, the amount of the starting bounty will increase to $5.50, and the rake will be reduced to $0.50. Other examples of the new buy-in structure include:

Party Poker is starting the new structure on 6th May to coincide with the start of the PowerFest series. The site has said it intends maintaining the structure on a trial period for six months, after which it will consider making the change permanent. The decision will likely depend on how well the tournaments are supported and whether other sites follow suit and scrap the unfair rake in bounty tournaments.

Party Poker´s PowerFest series gets underway in just three weeks´ time. The $40 million series consists of 366 events divided into five buy-in levels (High Roller, High, Mid, Low, Micro) with the occasional Super High Roller added into the mix. On most days, up to five tournaments will start simultaneously every two hours between 5:00pm and 11:00pm (all times CER), with the action starting two hours earlier on Sundays and additional set of daily tournaments squeezed in at 9:30pm.

There are a significant number of Progressive Knockout tournaments included in the schedule, so it will interesting to compare these events to those played in previous PowerFest series – not only to see if they attract more entries due to the removal of the rake, but also to see how big the bounties grow. Remember, when you knock out a player in a PKO event, you only with half the bounty amount. The other half is added to the bounty on your own head.

Satellites are already in full swing for the PowerFest series, but if you were thinking of reloading your Party Poker account in the near future, we suggest you wait a couple of days. The site has announced the PowerFest series will be supported by more than $400,000 in promotions – one of which we believe is a prize draw for depositors. It could be prudent to delay your reload deposit until details of the promotion are confirmed.