The British Poker Awards has opened voting in two new categories – “Hand of the Year” and “Best Poker Site” – and announced a new sponsor for the event. 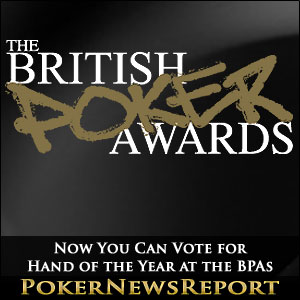 The British Poker Awards has opened voting in two new categories – “Hand of the Year” and “Best Poker Site” – and announced a new sponsor for the event.

Last month the British Poker Awards revealed the nominees for twelve of their prestigious trophies, and now two new categories have been opened up for the public to vote on – “Hand of the Year” and “Best Poker Site”.

The list of sponsors for the glittering event next spring (date to be announced) has also been extended – the announcement of Unibet becoming the “headline sponsor” fortunately coinciding with the company´s forthcoming “London Unibet Open” which takes place at Asper´s in Stratford at the end of the month.

Hand of the Year

Choosing who to vote for in the “Hand of the Year” category is pretty tough because of the quality of the hands offered for selection. Each nominee is supported by a video of the hand for which they are being nominated, so voters can relive how:

(Tip – it is a good idea to mute the video at the top of the page before starting to watch any of the “Hand of the Year” videos.)

Voters will also be torn between whether the “Hand of the Year” should go to a player who enjoyed exceptionally good fortune (yes – we´re talking about you Mr Busquet) or who showed the greatest level of skill at the table (close between Davidi Kitai and Scott Seiver). The third option is to vote for the most sensational hand of the year – in which case Cary Katz would be the most likely winner.

This is an interesting category inasmuch as one would normally expect PokerStars to walk away with the award. However, after PokerStars recently enraged its players with a series of unpopular changes – including the introduction of foreign exchange margin – voters may not be so inclined to express their support for the world´s largest online poker site.

Eighteen online poker sites are listed in the nominees for the category of Best Poker Site – for which the award will be presented during the annual i-Gaming Business Affiliate Awards next February – and the likely front-runners for the trophy include DusktillDawn Poker, Genting Poker and Grosvenor Poker.

Interestingly, Sky Poker is excluded from the list (at the moment) – a site which has made a colossal contribution to British Poker over the years and which, in 2014, hosted two hugely successful UK Poker Championships at the Dusk till Dawn Poker Club in Nottingham.

Unibet to be Headline Sponsor

Unibet Poker is using the British Poker Awards to gain a bigger foothold in the UK online market by sponsoring the event. According to Martin Stalros – Unibet´s Head of Poker – online poker in the UK is the London-based company´s fastest growing market and he sees Unibet´s sponsorship of the British Poker Awards as a great opportunity to increase the company´s profile. He added:

The BPA is something we look out for at the start of each year and I think most British players would agree that it’s the most important annual awards we have for poker. It also happens to be the most entertaining, and we’ll be doing our best to make sure that can still be said for at least another year!

You can vote on your choice in all the fourteen categories over at the British Poker Awards website.

UPDATE: Following the publication of this article, we approached the British Poker Awards and Sky Poker to find out why the site was not included in the nominations for “Best Poker Site”. Due to our diligence, the omission has been corrected, and Sky Poker is now included among the nominees for this prestigious award.