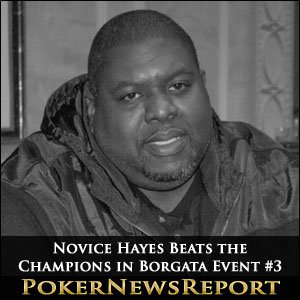 Marvin Hayes confessed to being as surprise as anybody after winning the $100,000 guaranteed Event #3 at the Borgata Fall Poker Open. Hayes – a truck driver from Brooklyn in New York – overcame the challenges of dual Borgata Champions “Action” Bob Hwang, Manh Nguyen and Brian O´Donoghue to take down the $53,637 first prize in his first ever casino tournament event

The winner admitted that he has a little experience from playing home games in and around Brooklyn, and he used that experience to build up a substantial chip lead just before the money bubble and remain within the top three chip stacks for the rest of the tournament – defeating “Action” Bob Hwang in the heads-up climax to the event.

Hayes took a massive stack of 4 million chips to the ten-handed final table (average 1.6 million chips), which took little more than four and a half hours to complete. With blinds of 25,000/50,000 (ante 5,000), it did not take long for the short stacks to start shoving, and Kevin Kiernan was particularly unfortunate to be sent to the rail in tenth within minutes after he shoved his pocket Queens into the pocket Kings of Kirkor Tekneci.

More bad luck followed for Eddie Blumenthal, who took a huge hit to his chip stack when his pocket Aces were cracked by Manh Nguyen´s pocket Queens, and then Blumenthal was bust from the Borgata Fall Poker Open Event #2 when Nguyen hit a set of Fives to best Blumenthal´s paired Ace-Nine. However, Nguyen´s participation in the tournament was not to last much longer and, after being caught bluffing by Marvin Hayes in a 6.8 million chip pot, lost the remainder of his chips to Kevin O´Donoghue´s pocket Tens.

Bob Hwang moved a little closer to chip leader Marvin Hayes when his pocket Queens flopped a Full House to see off Kevin O´Donoghue in seventh place and his pocket Fours held against Deon Nossel´s Ace-Nine to bust Nossel in sixth place. However, Marvin Hayes was not prepared to see his chip lead whittled away without a fight, and he called Kirkor Tekneci´s shove with pocket Jacks with his own Ace-Queen, and saw an Ace land on the flop to send Tekneci to the rail in fifth.

As the tournament went four-handed, there was no let-up in the speed of the knockouts. Nick Partenope finished in fourth place when his 10♦ 9♦ failed to improve past Marvin Hayes´ K♦ 2♦, and Dan McAuliffe left the event in third after moving all-in for his last 2.7 million chips with Queen-Ten and seeing Marvin Hayes (Ace-Nine) pair his Ace on the flop.

Despite having eliminated the last three players, Marvin Hayes only took a 9.7 million -v- 7 million chip advantage into the heads-up against Bob Hwang (blinds now 120K/240K – ante 30K). However, he used that advantage well to reduce Hwang to less than 3 million chips before Hwang scored a double-up A♥ 4♥ > K♠ 10♠ to get within four million chips of Hayes.

The shock of losing the flip galvanised Marvin Hayes, and he once again applied the pressure to Bob Hwang – reducing him to four million chips prior to the concluding hand of the tournament:

On a flop and Turn of 3♠ 8♠ 10♠ / Q♠ Hayes check-shoved all-in and Hwang made the call, When the cards were on their backs, Marvin Hayes had 7♠ 5♠ for a flopped flush, while Bob Hwang could only show Q♦ 9♦ for a Turned pair of Queens. Hwang was drawing dead, and the title of Borgata Fall Poker Open Champion went to the “surprised” Marvin Hayes.

In total, the $400.00 buy-in tournament received 658 entries – smashing the guarantee for the event and creating a prize pool of $230,300. 63 players cashed in Event #3 of the Borgata Fall Poker Open, with those who made it to the final table receiving the following amounts: