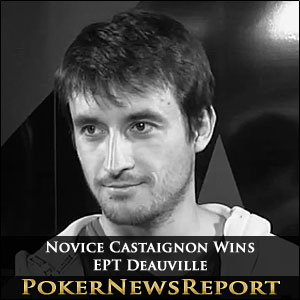 The 29-year-old native of Saint Aunix Lengros in the Pyrenees showed little respect for his more experienced opponents as he took down the final table of the EPT Deauville Main Event in less than six hours and became only the second French poker player to win this prestigious event.

Castaignon was helped considerably by coming to the final table with a chip stack almost three times the size of second placed Walid Bou Habib and five times that of most of his competitors; but whereas the headline would suggest it was plain sailing for the tournament winner, the truth is a lot different.

Castaignon Loses Lead in One Orbit

The action started thick and fast on the final day of the EPT Deauville Main Event (Level 29 – blinds 40,000/80,000 ante 10,000). Jeffrey Hakim (A♦ K♣) was eliminated in the very first hand when shoving his last chips into the A♥ A♠ of Enrico Rudelitz and Rudelitz took the chip lead after one of the most amazing calls seen at a final table.

On the flop of Q♣ 6♦ 3♠, Rudelitz (Q♥ Q♠) lead out with a bet of 350,000 chips. Remi Castaignon called that bet, and Rudelitz´s bet of one million chips after the turn 10♣. Rudelitz shoved his last 2 million chips into the pot following the 4♦ and, after a five minute tank, Castaignon made the call and turned over 5♥ 5♦ for a huge hero call – but one which cost him over 4 million chips and the chip lead.

Remi Castaignon lost further ground on the new chip leader – being forced out of a half million chip pot by the German´s aggression on the river – and then lost second place on the leaderboard when Walid Bou Habib eliminated Noel Gaens in seventh (A♥ A♠ > 10♥ 10♦) to climb above 6 million chips. Rudelitz extended his lead further by busting Joseph El Khoury in sixth place (Q♣ Q♠ > A♣ 7♣) and the more Castaignon tried to recover his top spot the more it seemed he was leaking chips.

Castaignon Gets Lucky then Gets His Revenge

Remi Castaignon´s return to the top of the leaderboard was courtesy of a little good fortune in the elimination of Franck Kalfon in fifth place. Having been dealt A♠ A♥ on the flop of Q♦ 10♠ 3♠, Castaignon had an easy decision to make when faced with Kalfon´s K♠ Q♠ shove. However, the turn card K♥ gave the advantage to Kalfon until the 10♥ on the river cruelly paired the board and gave Castaignon a better two pair.

Castaignon then got his revenge on Enrico Rudelitz when his J♥ J♠ held against Rudelitz´s A♣ 9♣ to eliminate the 25 year old German in fourth position and within a few hands was dealt pocket Aces again to bust Robert Romeo (A♦ K♣) in third. Going into the heads-up, an extremely animated Castaignon had 14,765,000 chips as opposed to Walid Bou Habib´s 8,620,000.

Heads-Up is One Way Traffic

Walid Bou Habib´s chances of causing an upset and denying the French a home victory were severely dented when he lost a five million chip pot in the early exchanges of the heads-up. Further 1 million chip losses reduced the Lebanese player to under 5 million chips and, despite chipping back up when rivering a straight, Remi Castaignon´s victory was wrapped up within the hour.

In the final hand, Castaignon (3♠ 3♥) raised from the big blind up to 1,025,000. Bou Habib (K♥ 8♥) responded by shoving all-in and Castaignon made the call. The flop of 6♣ 4♦ 5♠ gave both players the chance of a straight, put kept Castaignon in the lead. Neither the 10♣ on the turn or A♥ on the river improved Bou Habib´s hand and Remi Castaignon had won the EPT Deauville Main Event.