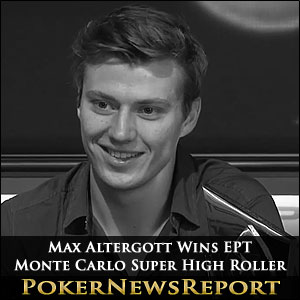 Not many people (if anybody) would have included Max Altergott in their GPI Fantasy League picks for the Grand Final of the European Poker Tour, for the German – who plays high stakes NL Hold´em on PokerStars under the name of ‘AltiFC’ – does not have a single entry on his Hendon Mob database – until now.

Altergott was a late arrival into the tournament (he joined during Level 6 on Day 1) and remained pretty anonymous throughout Day 2, despite flirting with the chip lead during the long session of play before the final table bubble burst. When the seven-handed final table of the EPT Super High Rollers started yesterday, Altergott had a healthy 40BB stack, but had a considerable amount of work to do to catch overnight chip leader Jason Mercier.

Short Stacks Make a Fight of It

With blinds of 25,000/50,000 (ante 5,000) when play re-started at the Salle des Etoiles, the short stacks had work to do – but work they did. Mike Watson doubled up in the second hand with K♠ J♣ over Scott Seiver´s pocket Sevens and then Seiver (Q♥ 4♦) tripled up against Watson (9♠ 7♠) and Timothy Adams (10♦ 5♦). Seiver managed another double up against Vladimir Troyanovsky (K♣ 8♥ > Q♥ J♣), but eventually Mike Watson picked the wrong moment to attempt another double-up and ran his K♦ Q♠ into the A♠ A♦ of Sorel Mizzi.

With the elimination of Mike Watson in seventh, Sorrel Mizzi took the chip lead after having taken a ½ million chip pot from Mercier Q♦ J♥ > A♣ 3♥ and 225,000 chips from Max Altergott (A♠ 10♣ > K♦ Q♣), while Mercier´s chip stack was in rapid decline due to losing a million chip pot against Vladimir Troyanovsky (K♥ J♣ turned a Jack > A♥ 10♠).

Scott Seiver was unlucky to bust out in sixth after shoving several times with excellent hands and finding no callers. On his final attempt for another double-up, he got his final 895,000 chips in from early position with 9♠ 9♦ and was snap-called by Jason Mercier (A♠ Q♠). Seiver looked in good shape to double up after the flop of 5♠ K♦ 5♦, but the turn 10♠ and river 8♠ gave Mercier a runner-runner flush and eliminated the PCA Super High Roller champion from the tournament.

With the elimination of Scott Seiver, Jason Mercier moved back into the chip lead, but it was soon to be taken away from him when Max Altergott doubled up against him A♣ J♣ > A♦ 3♠ and Sorel Mizzi bust Vladimir Troyanovsky out in fifth A♥ J♣ > K♣ Q♦. Thereafter, if you blinked, you missed who was leading the EPT Super High Roller:-

The initial exchanges between Max Altergott and Jason Mercier were exceptionally tight – with Jason Mercier creeping back into a narrow chip lead when Altergott (6♥ 2♥) tried to bluff the PokerStars Pro out of a pot in which Mercier (9♠ 8♦) had turned trips. However, the failed bluff by Altergott may have influenced Jason Mercier´s betting action in the following hand which was the turning point for Max Altergott´s EPT Super High Roller victory.

The pre-flop betting had seen each player put a million chips into the pot (blinds by now were 50,000/100,000) and following the flop of 8♠ 7♥ J♦ Jason Mercier check-called Max Altergott´s 700,000 bet. Max Altergott was again the initial aggressor after the turn 4♦ with a 1,210,000 chip bet, but Mercier responded by putting the German all-in. Altergott called and the cards were on their backs.

Mercier K♦ 7♦ for third pair and a flush draw

Altergott Q♣ Q♠ for an overpair