November Threat to Online Poker in the United States

The possibility that the “Restoration of America´s Wire Act” could be passed during November poses a genuine threat to online poker in the United States. 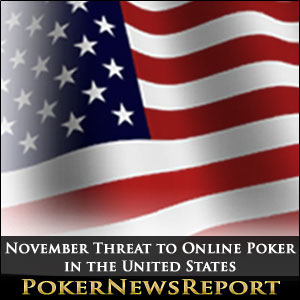 The possibility that the “Restoration of America´s Wire Act” could be passed during November poses a genuine threat to online poker in the United States.

Back in March, South Carolina Senator Lindsey Graham and Utah Representative Jason Chaffetz introduced a bill into Congress entitled the “Restoration of Americas Wire Act” (RAWA). The bill was backed by anti-online gambling campaigner Sheldon Adelson and his Coalition to Stop Internet Gambling

The bill was read in both houses of Congress before being passed to the Committee on the Judiciary – where it would normally stay until time ran out for the bill to be considered. However, a massive effort by supporters of Sheldon Adelson to have the bill debated in Congress during the forthcoming lame duck legislative session (November 9-26) could see RAWA being passed into law.

The aim of the bill is to restore [the] long-standing United States policy that the Wire Act prohibits all forms of Internet gambling. If passed, the bill would apply to online casinos and online State lotteries as well as online poker, with the only exceptions being online pari-mutuel betting on horse racing (exempted by the Interstate Horseracing Act 1978) and fantasy sports betting (exempted by UIGEA).

Under the current wording of the proposed legislation, online poker in the three regulated markets of Nevada, New Jersey and Delaware would have to cease, and all attempts to bring online poker to California, Pennsylvania and other states would be pointless. Effectively, if RAWA passes Congress during the forthcoming session, it would put an end to legalised online poker in the United States.

The timing of the move to get RAWA passed is not accidental. The lame duck legislative session is one where outgoing Congressmen and Congresswomen defer major legislation to the succeeding Congress and deal with relatively minor matters – often free of any party direction. Many of them will owe a debt of thanks to Sheldon Adelson for his financial support during their election campaigns and will feel it can be repaid by supporting the proposed Graham/Chaffetz legislation.

Earlier this year, politico.com reported that Sheldon Adelson had agreed to stay out of the 2014 Senate race in return for Senate Majority Leader Harry Reid giving RAWA a clear passage, and co-chair of the Coalition to Stop Internet Gambling – Wellington Webb (a former mayor of Denver) – has recently been using his political influence to spread fears that online poker in the United States is harmful to minorities and that it will deprive communities of jobs.

As lame duck sessions only come around once every two years, Adelson and his supporters will see this as the last opportunity to get anti-online gambling legislation passed before the regulation of online poker in California – which could then act as a game changer for other states considering online poker, and for those who are elected to represent them!

Could Online Poker Possibly be Exempted from RAWA?

This is an interesting consideration and one which was recently discussed on pokerrealmoney.com. According to the article “PPA Pessimistic about RAWA Poker Carve-Out”, rumours have been circulating that online poker could be exempted from RAWA in order to get the bill passed. The article suggests that Harry Reid´s deal with Sheldon Adelson might have included an exclusion for online poker, or that the three states which have already regulated online poker in the United States may be grandfathered in.

However, the article also states that representatives of the Poker Players Alliance – John Pappas and Rich Muny – have publicly warned that they do not expect online poker to be exempted from the legislation. They point to Sheldon Adelson´s well-chronicled comments that he will spend whatever it takes to win his fight against Internet gambling in America, and have asked players to join their Fight Back against Online Poker prohibition Effort.

You can find out more about the “Restoration of America´s Wire Act”, and the action that the Poker Players Alliance is taking to raise awareness of the threat to online poker in the United States this November, by visiting theppa.org.