A November Niner, Matt Giannetti, will be joined by a host of other big-name poker pros for the invitation-only $25,000 Premier League Mixed Game Championship in London this weekend. 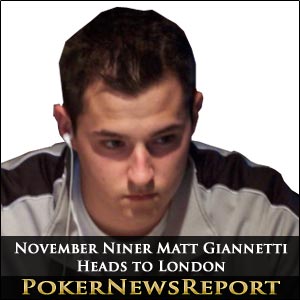 A November Niner, Matt Giannetti, will be joined by a host of other big-name poker pros for the invitation-only $25,000 Premier League Mixed Game Championship in London this weekend.

Matt Giannetti picked up $3,012,700 for finishing fourth in the World Series of Poker (WSOP)’s main event, which was won by German Pius Heinz in Las Vegas on Tuesday, but will still make the journey to Britain’s capital city.

The self-taught pro from Austin, Texas, will line up alongside the likes of Mike Sexton, Tony G, Sorel Mizzi and, curiously, Jennifer Tilly at the Playboy Club on Sunday in what should be a thrilling tournament.

I say curiously when referring to Jennifer Tilly as the actress only this week announced her likely retirement from poker on CBS-produced programme The Late Late Show.

Maybe she will still stick to that suggestion but first fulfil all previously agreed tournament entries. But let’s hope that she was just having a little joke with host Craig Ferguson.

Each group of six will play Pot-Limit Omaha, Pot-Limit Hold’em and No-Limit Hold’em, with points handed out in each version of the poker games. The leading three from the two groups will then advance to a final table showdown, which will again consist of rounds covering the three disciplines.

The finalists are certain of picking up at least $25,000 at the November 13-17 event, as well as a seat at next year’s WPT Premier League Poker main event, while the winner will receive $100,000.

Certainly, Australia Tony G is eager to get going and said: “I cannot wait – I am going to take everything they have. I am going to mix the mixed game up and put on a show.”

While 11 of the dozen pros lining up on Sunday will undoubtedly be well known to fans of the game, Carpenter is probably a new name to many.

However, the Englishman – who won his entry via a qualifier with Party Poker – is sure to create an impression, with commentator Jessie ‘The Voice of Poker’ May suggesting that Carpenter is outspoken but also highly skilled.

Sky Sports will televise the event in the United Kingdom, but will then distribute the rights for international audiences, so there is no need to panic – you will see these stars battle it out soon enough.

Poker Hall of Famer Sexton is also thrilled by the prospect of facing up to some of the world’s best over three variations of the game, and said: “I think it’s fantastic that games other than No-Limit Hold’em are going to get TV exposure. Poker is more than one game. This is a bold move, but a good one.”

The line-up is as follows: