The final table of the World Series of Poker has been put back one day to accommodate “near live” WSOP television coverage by ESPN. 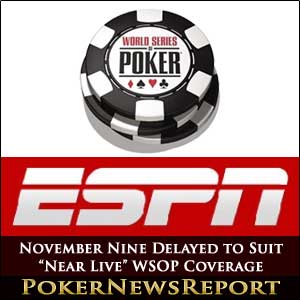 The final table of the World Series of Poker has been put back one day to accommodate “near live” WSOP television coverage by ESPN.

Caesar´s Interactive Entertainment – owners of the World Series of Poker – announced the change today, and revealed that the “near live” WSOP coverage would draw fans even closer to the action.

Previously, coverage of WSOP events has been broadcast with a 30 minute delay, but the new schedule will enable the entire final table to be televised “virtually live” on ESPN and online at ESPN3.com. The revised schedule will allow for hole cards to be shown and “near live” commentary from leading personalities of the world of poker.

WSOP Executive Director Ty Stewart was particularly gushing about the announcement. At the press conference in which the news was revealed, Mr Stewart said “This coverage shifts the paradigm for poker’s potential on television and will showcase our championship with unprecedented richness and scale. For the first time, we will truly be represented as live sport versus just being broadcast on a live sports network.”

What it Means to the Players

The Final Table Line Up

In case you had forgotten, here are the nine players who will be in combat over the two days for a first prize of $8.71 million. A full profile of each player will be published on Poker news Report prior to the climax of the event, with a complete betting show for those who fancy winning a buy-in for next year´s WSOP Main Event!