PokerStars, Wynn and 2UP are not among the companies approved by New Jersey officials to conduct online operations. 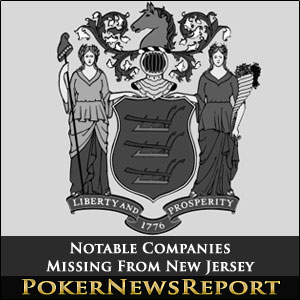 PokerStars, Wynn and 2UP are not among the companies approved by New Jersey officials to conduct online operations.

Over the course of the week, a plethora of online gaming companies have been approved by the New Jersey Division of Gaming Enforcement (DGE) to conduct online gambling operations when NJ’s iGaming goes live on November 26th. As of last Friday, Caesars, Ballys Technologies, Amaya Gaming, Party, 888 have all been rewarded the right to participate, among others.

UK-based 2UP is also absent from the list. Last summer the company received a commitment from an unnamed Asian investment group to invest $330 million towards the purchase of an Atlantic City property. Although there was speculation that the group was interested in purchasing the Atlantic Club Casino, 2UP has done little to back up its claims. Which leads some to believe that the group is less interested in actually making a purchase and more interested in publicity.

Finally, Wynn Interactive, which like Caesars Entertainment, is partnered with 888 Holdings, has failed to receive approval. However, Wynn is a late entry to New Jersey’s iGaming, and will likely receive approval, if not by November 26th then soon after. Together 888 and Wynn will become part of the All American Poker Network in Nevada and New Jersey. Wynn is also allegedly aligned with Caesars to use one of the latter’s four New Jersey licenses.

Just because a company has not yet been approved, does not mean that an approval isn’t pending. The Rational Group and Wynn Interactive may very well receive a waiver before the November 28th launch. To date, five of Atlantic City’s twelve casinos have received a gaming permit, leaving Caesars four New Jersey properties, Resorts, Revel and the Atlantic Club as the only casinos pending approval.

Due to their extreme financial concerns, it appears that Revel and the Atlantic Club will not be venturing into the world of iGaming at this time. The Atlantic Club filed bankruptcy last week; Revel earlier this year.