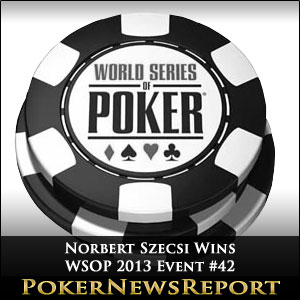 Norbert Szecsi has won the WSOP $1,000 No Limit Hold’em event (#42), winning his first ever WSOP Gold Bracelet and $345,037 for his stellar play in the three day tournament.

The Hungarian blitzed the later stages of the final table en route to taking out the tournament, eliminating the final three players to get first place. It was a quick final table, with Jonathan Bennett being the first player knocked out soon after it began.

He was followed by Dana Buck, who was eliminated a short time player in eighth place, and Ariel Celestino, who settled for seventh spot in the event. Bruce Landler was the next player to go, being sent packing in sixth place, while Rory Mathews was knocked out in fifth spot shortly after losing a huge hand to the eventual winner.

Fourth place went to Kirby Martin, who was eliminated from the final table after losing his final hand to Szecsi. Martin, who had A♥ 8♦ raised to 75,000 before the flop and was called by the Hungarian, who had K♣ J♣.

The flop came 6♣ A♠ 8♣, giving Martin a two pair while Szecsi had a flush draw. Szecsi checked and Kirby bet 85,000, which was also called by Szecsi before the J♥ came on the turn, which kept Martin in the lead.

Once again, Szecsi checked before Martin moved all in for 860,000 chips, which was eventually called by Szecsi after spending a few minutes pondering his move. It turned out to be a good decision for the Hungarian as the 10♣ on the river gave him the flush he was after, which put the tournament down to three players.

It did not take too long for Szecsi to strike again after knocking Chris DeMaci from the tournament after winning a showdown. With A♠ 10♠, DeMaci moved all in before the flop and was called by Szecsi, who showed K♦ K♠.

DeMaci was unable to beat the Kings on the board, and he was eliminated from the final table in third spot to put the event down to heads-up play. It was not all bad news for DeMaci, however, as he still took $149,281 for his efforts in the event.

The elimination of DeMaci meant that Szecsi and Denis Gnidash were the final two players in the event, with the Hungarian holding a huge lead at the start of heads-up play. It was a lead that Szecsi would not relinquish as he went on to win the Gold Bracelet in quick fashion.

Gnidash bet a further 225,000 into the pot and was once again called by Szecsi, who was ahead at the point and remained ahead when the 3♥ was shown on the turn. Gnidash checked the turn while the Hungarian put out a 340,000 bet, which was called by the eventual runner up.

The 6♣ came on the river, which meant the hand belonged to Szecsi, who raised Gnidash all in. Gnidash called and was knocked out in second place upon finding out that he was beaten by Szecsi, who was crowned the winner of the event.