Voting has opened in 12 categories of the British Poker Awards 2014, with many previous winners appearing among the nominations for the prestigious titles. 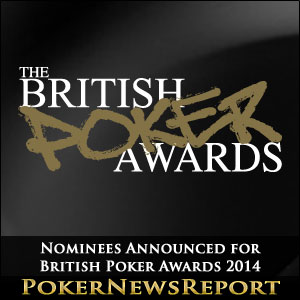 Voting has opened in 12 categories of the British Poker Awards 2014, with many previous winners appearing among the nominations for the prestigious titles.

The British Poker Awards is the annual back-slapping jamboree in which those considered to be the best of the best in the UK poker scene are acknowledged for their achievements with glittering prizes and warmly-deserved accolades.

Although the date and venue for this year´s awards ceremony has yet to be announced, the nominations for 12 categories in this year´s British Poker Awards have just been published, and the British poker playing public is invited to head over to thebritishpokerawards.com to vote for their favourite players, bloggers, tournaments, poker leagues, training sites and live card rooms.

The 12 Categories Open for Voting

There are a few small changes in the categories from previous years, with the awards for “Best Online Cash Player” and “Best Online Tournament Player” being combined into one “Best Online Player”, and the award for “Best Poker Software” being scrapped and replaced by “Best Breakout Player”. The full list of categories open for voting is as follows:

Voters visiting the British Poker Awards website will notice that four other categories are also listed. Nominations for “Hand of the Year” will be announced closer to the end of the year, while the categories of “Best Tournament Director”, “Players´ Player of the Year” and Lifetime Achievement Award” will be chosen by peers, players and a panel of judges assembled from the events´ sponsors.

Who is in the Frame for an Award?

Looking through the list of nominations among the 12 categories open for voting there are a host of familiar names. Ever-present Neil Channing (winner of a trophy in each of the four previous British Poker Awards) is among the nominations for “Best Social Media User”, as is Victoria Coren Mitchell (three times a previous winner), who is also in the frame for “Poker Personality of the Year” and “Performance of the Year” after being the first players to win two EPT Main Events with her victory at the EPT San Remo in April.

Another four-time winner – Chris Moorman – will face stiff competition in the category of “Best Online Player” from Alexander “Kanu7” Millar, who won both “Best Online Cash Player” and “Player of the Year” in 2013; while last year´s “Poker Personality of the Year” – Sam Grafton – is nominated in three categories for this year´s awards.

PokerStars are again set for another storming evening of awards. In addition to having three of their UK sponsored pros in the running for awards (Victoria Coren Mitchell, Liv Boeree and Jake Cody), Daniel Negreanu and Vanessa Selbst are among the nominations for “Best International Player” and the company are also represented in the categories of “Best UK Tournament” (EPT London) and “Best Card Room” (PSLive @ The Hippodrome).

One notable absentee from the nominations is the UK´s most successful player – both in terms of prize money earned and in previous British Poker Awards – Sam Trickett. Trickett has won six previous awards – including “Best Live Tournament Player” (twice) and “Best Live Cash Player” (three times) – but appears to have been overlooked on this occasion; possibly as a penalty for telling MC of last year´s ceremony – Michael Caselli – that he had already been told that he had won a prize before the event.

The British Poker Awards ceremony is unlikely to be hosted before next spring, but the British public should get over to www.thebritishpokerawards.com today to cast their votes for who they believe are the most successful in their respective fields. To get more information about the events ceremony, and to find out who wins the prestigious awards, you should follow @PokerNewsReport on Twitter.