Nominations are out for the European Poker Awards

The nominations include an impressive list of players, events and industry professionals, who will vie for the GPI 2014 European Poker Awards on March 25th. 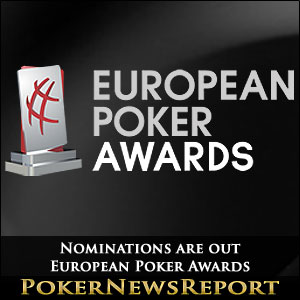 The nominations include an impressive list of players, events and industry professionals, who will vie for the GPI 2014 European Poker Awards on March 25th.

The fourteenth European Poker Awards takes place on March 25th at the Portomaso Marina Hilton Hotel on the island of Malta. Like the recently hosted American Poker Awards, thirteen awards will be presented to the players, events and industry professions who made the greatest contribution to poker in Europe during 2014.

Also similarly to the American Poker Awards, the glittering ceremony will take place after a poker conference – which will see two panels of industry professionals discussing “Live Poker in Europe: Current Climate and Future Innovations” and “Online Poker Snapshot: The State of Online Poker in Europe”. There will also be a player´s panel which will discuss the live poker ecosystem and what improvements players would like to see in 2015.

Who is in the Frame for an Award?

The following categories and nominations (in the order we believe they are going to be distributed) are:

Poker Innovation or Initiative of 2014

The two remaining awards are presented to the players or industry professionals who are considered to be the best ambassador for poker in Europe and deserving of acknowledgement for their achievements. The award for “Poker´s Best Ambassador” is determined by a public vote so, if you have an opinion on the matter, head on over to the European Poker Awards website and cast your vote.

The “Lifetime Achievement Award” is decided by an independent voting jury and presented to somebody with a long history of service to the poker industry. Last year the award was won by former Hendon Mobster Barny Boatman, and previous winners include Bruno Fitoussi, Marcel Luske, John Duthie and Dave Ulliot.

Maybe it is time for Sky Poker´s Tony “TiKay” Kendall to get the nod – who knows?