Nominate Your Choice for a European Poker Award

Nominations are now being invited for eight categories in the 12th European Poker Awards which take place at the Aviation Club in Paris on January 23rd 2013. 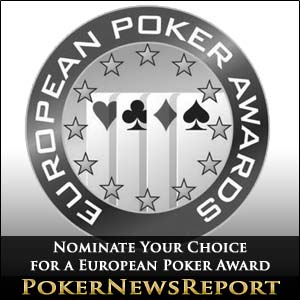 Nominations are now being invited for eight categories in the 12th European Poker Awards which take place at the Aviation Club in Paris on January 23rd 2013.

The European Poker Awards are one of the most prestigious event ceremonies in the poker world – recognising the talents of players who compete throughout the year, rewarding those who work so hard behind the scenes and acknowledging the achievements of players who have continually been at the top of their game.

January´s knees-up at the Aviation Club is for the first time being sponsored by the Global Poker Index, who will be awarding goodies to those who appear at the top of their rankings. However, the general public are also being asked to contribute their nominations for awards, which will then be voted on by a jury comprised of representatives from the Aviation Club de France, readers of French poker magazine Poker24 and the Global Poker Index´s Alexandre Dreyfus.

The eight categories in which nominations are invited are:-

Nominations can be submitted on the European Poker Awards web site but have to be done before December 12th in order for your nomination to be considered by the panel of judges.

Despite the potential for a distinct French bias, poker players from the UK have a fine record at the European Poker Awards. James Bord, Jake Cody and Liv Boeree all picked up awards in 2011 and Sam Trickett was named Player of the Year in 2012. Barny Boatman and Dave Ulliott have also come away from Paris with silverware for their mantelpieces since the event started in 2001, and you can find out who the next winners of European Poker Awards are by following PokerNewsReport.com on Twitter.