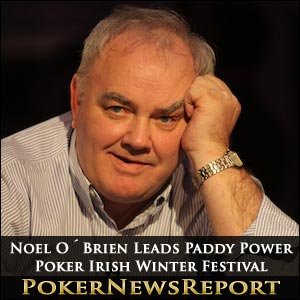 The field chasing the three leaders includes the winner of this year´s Irish Open, Niall Smyth, and Slovenia´s Matej Kokalj, who almost won this event in 2009. With only two of the twelve remaining players having less than 20 big blinds in front of them, today´s conclusion to the event could go way into the early hours (again!).

260 players paid the €1,100 buy-in and another 135 qualified online at Paddy Power Poker to create a total entry of 395 playing for a first prize of €100,000. By the close of play on Saturday night, the field had been reduced to 121 and was led by English poker player, David Rudling. Rudling had a chip lead of over 40 big blinds, but much of his advantage was wiped out by Niall Smyth, who flopped a set of Nines to master Rudling´s A♠ K♥ in the second level of the day, and Rudling was then crippled by Englishman Philip Peters, who flopped a straight flush to take Rudling for another 70,000 chips. From there Rudling did well to limp into the bubble, and finished in 34th position for €2,200.

The Rise and Demise of Collette Murphy

Throughout most of Sunday, many eyes were on Collette Murphy. Collette has made a number of final tables in prestigious Irish tournaments, but the Irish Winter Festival would have been her biggest achievement to date. Having enjoyed a little bit of the Irish luck towards the close of play on Day 1 when spiking a seven on the river to way a three-way pot (77 -v- 99 -v- AA), Collette built her stack up to 530,000 by the time the bubble had burst and we were reduced to the final forty players. Sadly her good fortune deserted her in the run up to the final table, with John Keown and Colm Hayes being the major beneficiaries. Collette eventually finished in 17th, after shoving her last 220,000 chips into the middle with 2♥ 2♠, only to be snap called by Keown, whose A♣ A♥ held to eliminate Collette from the Event.

O´Brien Comes From Nowhere to Lead

Noel O´Brien had been sitting comfortably in mid-position throughout the day, and once the bubble burst he began to get more active. Noel, who final tabled behind Joeri Zandvliet at the UKIPT in Dublin last month, held on with the “Boatman hand” – Q♠ 7♠ – to bust Philip Peters (J♠ 10♣) in fourteenth and then flopped trip Aces to eliminate Padraig Hehir (8♦ 2♦) in thirteenth before the tournament director called a close to the day´s proceedings. Noel´s stack of 882,000 chips gives him a potentially match-winning advantage over Ville Salmi (721,500 chips) and Chris Dowling (715,000), with the full list of chip counts as follows:-

Quote of the Day

Quote of the day came from poker legend Nicky Power, who was being interviewed mid-way through a not very successful day. Bemoaning his luck in the Paddy Power Poker Irish Winter Festival Main Event, he stated that if he were to bust out before the start of the Blind Man´s Bluff World Poker Championship he would have a crack at that tournament. “God knows I might play better if I can´t see my cards” said the Waterford man. Sadly Nicky did not get into the money, but was in good company among other players who failed to cash – among them WSOPE Main Event final tablist, Dermot Blain, November Niner Eoghan O´Dea, Neil Channing and – fresh back from a heart operation – 888 Poker´s Padraig Parkinson.