The Master Classics of Poker Main Event started yesterday in Amsterdam, with Noah Boeken emerging at the end of the day to lead a packed international field. 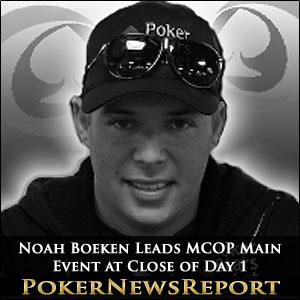 The Master Classics of Poker Main Event started yesterday in Amsterdam, with Noah Boeken emerging at the end of the day to lead a packed international field.

Boeken bagged and tagged 184,100 chips after eight levels of play after having doubled up early and then taken three streets of value from compatriot Raoul Refos when his A♣ 10♥ found an Ace on the flop and Refos missed his Club flush draw. Boeken also busted Ana Marquez out of the tournament after she had re-entered for a second time.

Crazy Start to the Day 1

With the MCOP Main Event offering an unlimited number of re-entries during Day 1, the play was pretty loose throughout. The start of the event was delayed for 30 minutes while a series of one-hand satellites took place, and the craziness of putting €400 on the turn of a card to win a seat in the Main Event continued into the early hands of Level 1.

Pascal Vos flopped trip Sixes in the very first hand of the tournament to crack an opponent´s pocket Aces, and double up after the opponent had limped in from late position, and November Niner Michiel Brummelhuis got off to a poor start when allowing Rens Feenstra to take three streets of value from him with a flopped pair of Kings.

Brummelhuis was the most high-profile player to bust from the tournament and re-enter the €4,000 buy-in MCOP Main Event (he actually fired three bullets), and other players who had to dig a little deeper in their pockets during the day included two former EPT London Main Event winners Robin Ylitalo and Ruben Visser and runner-up in the UKIPT Isle of Man Main Event Fatima Moreira de Melo.

Other players who fired two bullets but failed to survive to the end of the day included PokerStars sponsored pros Liv Boeree and Lex Veldhuis, and while it may be possible to buy-in once again before play re-commences at the Casino Holland in Amsterdam, a number of players are commenting that the field is of such high quality that it may not be worth their while to get involved again with a stack two-thirds of the average (43,350 chips).

Although it is known that 289 individual players entered the Master Classics of Poker Main Event, organizers are still counting up the re-entries to work out how many players will cash in the event and for how much. It is already assured that the prize fund will top the €1 million mark, and those looking to get a lion´s share of it include:-