Dutch poker player Noah Boeken is the latest player to be enlisted by MyPokerSquad.com, offering a 30% stake in an upcoming tournament. 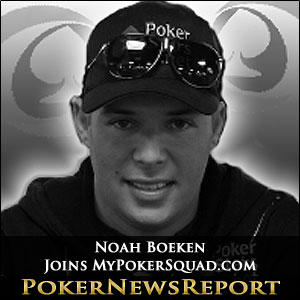 Dutch poker player Noah Boeken is the latest player to be enlisted by MyPokerSquad.com. He is offering a 30% stake in an upcoming tournament.

Noah Boeken is a Team PokerStars Pro member and has become the newest player to join the MyPokerSquad platform. The Dutch poker pro has joined the ranks of a number of top poker players in this exciting staking and sponsorship platform.

Boeken is a great choice for MyPokerSquad, having already shown that he can win large sums of money playing poker. Since Boeken played in his first live tournament a little under 10 years ago, in 2003, he has earned a whopping $1.26 million in poker winnings. In 2001, Boeken began to play poker online, and in 2005, he won the Scandinavian Open, taking home $191,355. In 2007, the Dutch poker pro came fourth when he played in the €5,000 Master Classics of Poker Amsterdam. Fourth place earned him $201,032.

The next big tournament that Boeken plans to play in is the PokerStars Caribbean Adventure that takes place in the Bahamas. The tournament begins on Saturday, and as starting promotion with MyPokerSquad.com, Boeken has decided to offer 30 percent of his winnings via MyPokerSquad.

The way this works is that players get to buy 30 percent of Boeken’s PokerStars Caribbean Adventure ahead of time. For each percent that is bought, the person who bought a stake in this poker player’s game winnings will win one percent of his tournament winnings.

When Noah Boeken first heard about MyPokerSquad.com, he thought that it was a great idea. He said that the idea of people being able to purchase what is essentially a piece of a player makes the game far more exciting. The player himself is not the only one to sweat it when playing in a poker tournament, but those that have bought a percentage of the action are right there along with the player.

MyPokerSquad.com was started three years ago by American and French investors. The list of players already signed up with MyPokerSquad has already reached around 120 players, and the company plans to expand this year. Some of the well known poker names that have already joined are Sam Trickett, Michael Mizrachi, Patrik Antonius, Roger Hairabedian, and David Benyamine.