No Truth in Bwin.Party Sell-Off Claim Board

The board of Bwin.party stepped in quickly today to scotch rumours that the company was about to sell its online casino business to revive its ailing fortunes. 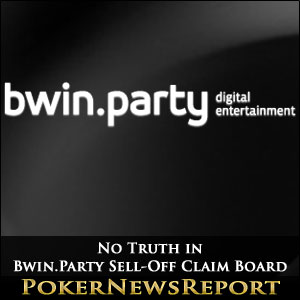 The board of Bwin.party stepped in quickly today to scotch rumours that the company was about to sell its online casino business to revive its ailing fortunes.

Speculation of a break-up of Bwin.party and the sell-off of its online casino was fuelled by an article on Bloomberg.com this morning (June 26) in which it was claimed that the company had conducted a strategic review, and a decision would be made within two months about the actions necessary to arrest an alarming decline in the value of the company – shares have fallen more than 30% in value since reaching a high of $1.41 last summer.

The article suggested that a Bwin.party sell-off was in line with comments made by the company´s Chief Financial Officer – Martin Weigold – during a March conference call, in which he said that Bwin.party faced a difficult year in 2014 due to regulatory and competitive challenges, and that the company was looking to divest non-core and surplus assets.

Is the Return of PokerStars Cause to Worry?

Christopher Palmeri – the author of the Bloomberg article – wrote that, in addition to a severe drop in the company´s value, Bwin.Party had experienced a disappointing start to its online poker activity in New Jersey and now faced the threat of PokerStars returning as a competitor after its parent company – Rational Enterprises – had been sold to the Amaya Gaming Group.

Bwin.party is currently the largest provider of online poker in New Jersey through its partnership with the Borgata Casino, and currently enjoys a 40% market share. This position is likely to change as soon as PokerStars – the world´s largest online poker provider – gets approval from the New Jersey DGE for its licence application, and starts operations with its own Atlantic City partner – Resorts Casino.

As the Bwin.party share price improved at the prospect of an asset sell-off, the Board of Bwin.Party issued a statement denying that there were plans to break-up or sell the company. In a short but carefully worded statement the Board acknowledged that Chairman Philip Yea had been looking at options to increase shareholder value, but said there were no plans to break-up the company:

The Board of Bwin.party has noted the recent speculation in the media regarding a possible break-up or sale of the company.

Since his appointment as Chairman last month, Philip Yea has been working with the executive management team on ways in which the Group can increase shareholder value, however we can confirm that there are no plans to break-up or sell the company.

If there are any further developments regarding a Bwin.party sell-off, you can be the first to know by following @PokerNewsReport on Twitter.