No More “Pope-erStars” as Amaya Withdraws from Grey Markets

Vatican City is listed among thirty “grey market” jurisdictions from which PokerStars and Full Tilt have withdrawn in an unexpected move by Amaya Gaming. 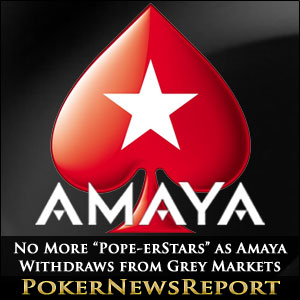 Vatican City is listed among thirty “grey market” jurisdictions from which PokerStars and Full Tilt have withdrawn in an unexpected move by Amaya Gaming.

At the end of last week, thousands of online poker players around the world discovered that they would no longer be able to play online poker on PokerStars or Full Tilt Poker, as the two companies were withdrawing from jurisdictions which were considered to be grey markets.

The news broke when players from the affected jurisdictions attempted to log onto their accounts and were greeted with the message that following a recent review of business risks and opportunities, PokerStars and Full Tilt Poker would no longer be offering real money games in their country.

In certain jurisdictions, even play money games are no longer available; and, with minimal communication coming from representatives of PokerStars and Full Tilt Poker, speculation has been rife about the reasons behind the withdrawal of service – and which countries may be affected in the next review.

Whereas much of the (uninformed) speculation was based around the high proportion of predominantly Muslim countries contained within the list of grey markets from which the two Amaya Gaming companies were withdrawing, one wag created an account on the 2+2 forum in the name of Pope Francis to provide a one-word comment on the withdrawal of PokerStars and Full Tilt Poker from Vatican City – Goddammit.

All forms of gambling in Vatican City are prohibited by law, and the loss of its 839 residents from PokerStars player database is hardly going to bring the online poker community to its knees; however, there were some surprising countries featured on the list of jurisdictions in which playing on PokerStars and Full Tilt Poker is no longer possible – including many with multiple brick and mortar casino facilities:

Much of the speculation revolves around Amaya´s license applications in the UK and in New Jersey – particularly with the comments made recently by NJ Senator Ray Lesniak that international poker tournaments like the Ryder Cup in golf will be coming to AC and that online poker players in New Jersey could soon be competing against players from the rest of the world (Vatican City excepted!).

Many of the comments posted on the 2+2 thread relating to the withdrawal of PokerStars and Full Tilt Poker from the selected jurisdictions were condemning of the lack of information provided by either company. Many individual posters reproduced emails they had received from customer support advising them on how to convert FFPs and Stellar Awards into cash in order that their bankrolls could be withdrawn, but – in a change from the norm – no company representative joined the discussion to explain why the move was being made.

The only shred of information that was provided from any official source was a tweet sent out by Eric Hollreiser – Head of Corporate Communications for PokerStars – which said:

Re Qs about our withdrawal from some markets: This action aligns PokerStars and Full Tilt with Amaya’s global market policies. (1/2)

These markets represent a tiny fraction of our global revenues and our global customer base. (2/2)

PokerStars has also added a small Q&A section to its website relating to prohibited jurisdictions. Among the most contentious issues within the Q&A are that players will not be able to transfer funds to other players and will lose their balances if caught playing online poker via a VPN from within a blocked jurisdiction.

Vatican City Blocked – Where Next?

Speculation is also rife about which other “grey markets” might also be prohibited in future reviews. In March this year, William Hill Poker withdrew from fifty-three jurisdictions which included Thailand, South Africa, Belize and Greenland. Other markets which could be considered “grey” could include Poland and Germany, Australia and New Zealand , China and most of India – where arguments for and against online gambling are currently being heard in the Supreme Court.

Also missing from the list was Canada – home of Amaya Gaming. Under Canadian law, only provincial lottery organizations are allowed to offer an online betting service and, in recent months, online gaming sites such as Ladbrokes, Matchbook and BetFred have withdrawn from the Canadian market to comply with legislation in the UK which limits how much activity companies can have in “grey markets”. PokerStars has announced that it will continue to provide a service for online players in Canada – but for how long?