There was a real sense of déjà vu when Day 3 of the LPS Millions II came to a close, with the top four players being the same as they were when play began. 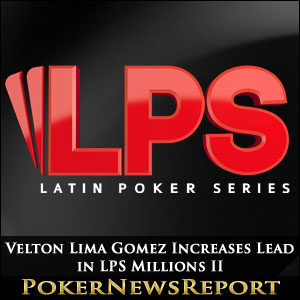 There was a real sense of déjà vu when Day 3 of the LPS Millions II came to a close, with the top four players being the same as they were when play began.

With another five levels of play in the books at the LPS Millions II, there is a familiarity about the top of the leaderboard. Overnight chip leader Velton Lima Gomez still retains top spot above Jeiko Palma, with third placed Luis Janampa having exchanged places with fourth placed Adrian Mendoza.

At least the action on Day 3 was a little more aggressive than the subdued atmosphere that was evident on Day 2 of the $1 million guaranteed tournament, with the result that only twenty-nine players remain in the event in pursuit of the $184,397 first prize with two days to go.

Gomez Wins Biggest Pot of the Day to Retain Lead

Up until the last level of the night, overnight chip leader Velton Lima Gomez had not enjoyed the best of days. Having lost a stack of chips to Ezio Fenocchio with a failed bluff, Gomez ground his way back to his starting stack going into the final level – still good enough for a top three finish, but probably not what he was hoping for.

Then, in practically the last hand of the night with blinds of 4,000/8,000 (ante 1,000), Gomez got into a pre-flop raising war with Weider Gutierrez and, after Gomez had five-bet up to 200,000 chips, Gutierrez announced he was all-in for his last 500,000 chips. Gomez made the call with pocket Aces, while Gutierrez sheepishly turned over Ace-Nine. The pocket Aces held, and Gomez now has a massive chip lead over the rest of the field.

If anything, Day 3 of the LPS Millions II was more noticeable for the players that busted out, rather than those who remain. Local legend Jose “Pepa” de la Guardia bust out in 52nd place when his A♥ 9♥ failed to improve past an opponent´s J♣ J♠, and PokerStars pro Ignacio Barbero finished one place higher when his A♠ 6♠ rivered two pairs but came second to his opponent´s flopped set of Nines.

Later bust-outs included Raul Pino – the third highest ranked Panamanian player of all time – Americas Ryan Dodge and George Gill, and the brilliantly named Abraham Bettstack. The final player to bust on Day 3 was Weider Gutierrez after losing the massive pot which spring-boarded Velton Lima Gomez back to the top of the leaderboard (mentioned above)

The Incredible Story of Yasser Fiallo

Another player we lost today was Yasser Fiallo. Fiallo was one of three players who qualified for the later stages of the LPS Millions II via the live Day 1F played at the Casino Gran Almirante in the Dominican Republic in August. However he failed to turn up in Panama to play on Day 2, and his chip stack of 64,500 gradually got blinded down.

However, because the blinds were reset to 500/1,000 (ante 100) at the start of Day 2, Fiallo survived five levels of play in his absence on Wednesday, and was eventually eliminated during the first level of play on Day 3. We know that Fiallo is still alive because we checked his Twitter account; so, Fiallo – if you are reading this – there is a cheque for $2,716 waiting for you at the Majestic Casino in Panama City!

Looking Ahead to Day 4 of the LPS Millions II

When play resumes at the Majestic Casino in Panama later today, the twenty-nine remaining players will be entering Level 20 (blinds 5,000/10,000 – ante 1,000). Play is scheduled to continue until just nine players are left to compete in Saturday´s final table and, if today´s action is anything like what happened yesterday, we expect the nine finalists to come from the following list: