No Chance for Reid Online Poker Bill in 2012

It seems that time has run out for the Internet Gambling Prohibition, Poker Consumer Protection and Strengthening of UIGEA Act, proposed by US Senator Harry Reid. 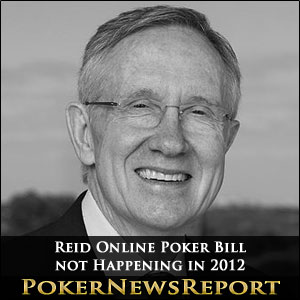 It seems that time has run out for the Internet Gambling Prohibition, Poker Consumer Protection and Strengthening of UIGEA Act, proposed by US Senator Harry Reid.

The Democrat from Nevada, together with his Republican counterpart from Arizona, Senator Jon Kyl, introduced the bill at the beginning of the year and hoped that it would pass during the Senate’s Lame Duck Session before the year was out.

Reid said that he was disappointed, but added that he and Senator Dean Heller, another co-sponsor of the bill, remain committed to this issue and it will be a priority for us in the new Congress.

However, Reid’s Chief of Staff, David Krone was more realistic about the bill’s chances of revival next year.

It is something next year we can investigate again, but for 2012, for this Congress we have run out of time. Our goal is definitely to try again next year but Senator Reid’s feeling is that after a while there comes a time when you’ve lost momentum, you’ve lost the consensus that you’ve built. There will be a window next year but I don’t see it going along.

While Harry Reid’s bill would have reshaped the landscape of online gambling on a federal level, it would have seriously impeded the attempts of individual states to run their own online games on an intrastate level, which is why the Gambling Prohibition, Poker Consumer Protection and Strengthening of UIGEA Act was so strongly opposed by these states.

After a draft of the bill was leaked, opposition mounted from several fronts, including national lotteries and the National Governors Association.

Essentially, the bill will allow online poker on a federal level but will make most other forms of online gambling illegal. The bill has the potential to override the opinion offered by the Department of Justice last Christmas that the 1961 Wire Act does not apply to any form of online gambling except sports betting, thus opening the door for individual states to push for their own legislation.