No Black Card, Iron Man or Rakeback on FTP

Representatives from Full Tilt Poker have announced that a new rewards program will be taking effect when the site re-launches on November 6th. 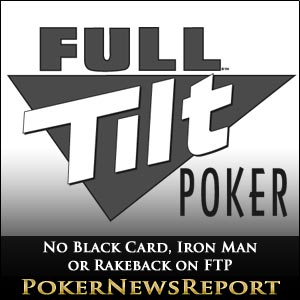 Representatives from Full Tilt Poker have announced that a new rewards program will be taking effect when the site re-launches on November 6th.

Former players on Full Tilt Poker who were hoping that some of the previous promotions would be continued when the site is re-launched next month have had their hopes dashed by a post appearing on the 2+2 poker forum from the FTP Poker Room Manager – Shyam Markus. In his post, Shyam announced that there would no longer be affiliate rakeback on FTP and outlined a new Full Tilt Poker rewards program which will replace the previous Black Card and Iron Man promotions.

Stating that it was felt too many promotions were in existence at one time for them all to be maintained (like – Dear Howard. Run out of money. Please drop two million in my account. Regards Phil), Shyam reported that the new rewards program would be available to everybody and would effectively be a weekly cash-back program based on the number of Full Tilt Points a player had collected throughout the week.

Although the higher level of the new Full Tilt Poker rewards program would enable players to receive $2.50 per 100 Full Tilt Points earned, Shyam said that the program´s value was in excess of the 27% affiliate rakeback on FTP because each player retained their FTP points (rather than cash them in) and would be able to use them in the FTP store or for tournament buy-ins.

Previous statuses in the Black Card and Iron Man promotions will be taken into account when the new Full Tilt Poker Rewards program is launched however, one further change that will affect reward hunters on the “new” Full Tilt Poker is that Full Tilt Points will be awarded on the “Weighted Contributed” method rather the previous “Dealt” method – rewarding those who get involved in the action rather than players multitabling 20 screens waiting for a premium starting hand.

Shyam also announced that players would be able to download the Full Tilt Poker software and log-in to their accounts prior to November 6th; although the facility to play real money games would not be available. Conscious of the fact that many thousands of players simultaneously downloading the software may lead to problems, Shyam also revealed that there would be significant testing on the Full Tilt Poker software before the site went live.

Meanwhile, on another 2+2 forum thread, players are giving their estimates of how many players will be online when Full Tilt Poker re-launches on November 6th. No money is being taken on players´ estimates (because the majority of contributors are American and they are not allowed to do that kind of thing on the Internet), but the average guess at the moment is around 30,000. Shyam Markus will be pretty happy if those estimates are correct!