An Illinois lawmaker modified his online gambling measure and the state of Texas has introduced initiatives for both live and online poker. 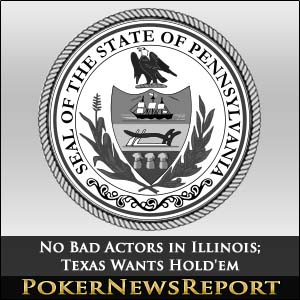 An Illinois lawmaker modified his online gambling measure and the state of Texas has introduced initiatives for both live and online poker.

Illinois Sen. Terry Link has amended his recent online gambling proposal to lessen the restrictions on so-called bad actors who flouted U.S. laws.
SB 1739 was introduced by Link last week and originally sought to exclude gaming companies who had accepted wagers via the Internet in the past 10 years from receiving an online gambling license in Illinois. That would have eliminated practically the entire online poker industry.

Link apparently saw the error of the bill’s language and amended it to read that only those convicted of violating U.S. laws would be precluded from the application process. The amendment is a complete about-face and would allow virtually everyone to participate in Illinois’ online poker scheme. That includes [geolink href=”https://www.pokernewsreport.com/pokerstars”]PokerStars[/geolink], who admitted no wrongdoing in settling the Black Friday allegations and subsequently purchasing Full Tilt last year.

Texas Opting In on Poker

Sen. Leticia Van de Putte filed a resolution earlier this month that would amend the state’s constitution and permit Texas to automatically opt-in to online poker legislation that may be approved on the federal level. That would make the Lone Star State the first to enact such legislation.

While the Reid-Kyl bill failed to gain support last year, rumors abound that a federal initiative may be introduced sometime this year. Federal lawmakers can plainly see that a number of states are jumping on the online gambling bandwagon and it would be in the country’s best interest to approve Internet poker legislation on the federal front.

Van de Putte’s Senate Joint Resolution 43 also calls for Texas to create its own state Internet poker scheme if federal legislators continue to sit on their hands. The Texas Lottery would oversee the online poker operation. Should a conflict arise among federal and state law, the federal statute would prevail. The resolution will be voted on by Texans during the Nov. 5 election, which is roughly eight months away.

Another proposal, House Bill 2098, was filed last month by Rep. Ryan Guillen that would permit social poker clubs in the state. The members-only clubs would not generate revenue from raked pots, profiting instead from membership fees and selling food and drink.

Texas is the second most populous state with 26.1 million residents and would be a crucial element to an interstate online poker regime.