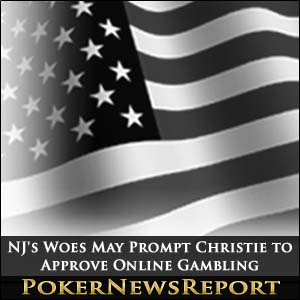 The New Jersey state legislature overwhelmingly voted in favor of making New Jersey the third state to approve Internet gambling in December. The bill now sits on Christie’s desk, needing only his signature in order for the Garden State to join Nevada and Delaware in providing intrastate online gambling.

Recent revenue figures released by the New Jersey Division of Gaming Enforcement reveal that Atlantic City casinos took in $3.05 billion in 2012. That amount is down from $3.3 billion in 2011 and marks six straight years of declining revenue since 2006 when the east coast casinos took in $5.2 billion from gamblers.

Superstorm Sandy that devastated the eastern seaboard and closed Atlantic City casinos for a few days in October is partly responsible for this year’s lackluster showing in terms of revenue. However, competition from casinos in nearby states such as Pennsylvania is more to blame for New Jersey’s half-dozen years of downward spiralling numbers. Pennsylvania has 11 casinos and has overtaken Atlantic City as the country’s second-ranked gambling market behind Las Vegas.

New Jersey has an opportunity to bolster its declining numbers and become an online gambling hub of sorts. And it all lies on the shoulders of Christie, who vetoed a similar bill in 2011. However, that veto power was exercised prior to the U.S. Department of Justice ruling that found the 1961 Wire Act applicable to only sports betting. That December, 2011 order has paved the way for individual states to enact their own online gambling laws.

Christie still has time to make his decision. New Jersey statutes permit 45 days following approval from the state legislature, which occurred in mid-December. Last time Christie waited almost the full 45 days before using his rubber VETO stamp. But with New Jersey needing to increase its faltering revenue, this time around Christie may reach for his pen instead.