With an expected online gaming launch in New Jersey set for mid-November, state regulators told licensees that partnerships must be in place by June 29. 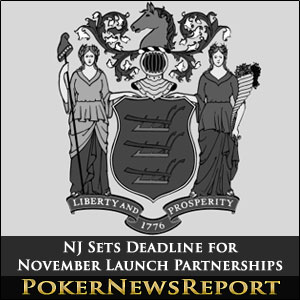 With an expected online gaming launch in New Jersey set for mid-November, state regulators told licensees that partnerships must be in place by June 29.

The New Jersey Division of Gaming Enforcement (DGE) instructed casino operators in writing that those who fail to detail their partnerships by the new deadline risk missing out on the anticipated launch that is now just five months away. A timely launch is desireable for online gaming operators to establish a foothold in the marketplace and to keep pace with competitors.

The deadline apparently surprised many overseas gaming software providers who were hoping to strike agreements with Atlantic City land-based casinos. A report by eGR has found several companies to be hurriedly scrambling to forge agreements by the deadline in order to be among those first-to-market in the Garden State’s online gambling regime.

State regulators need time to investigate prospective partnership companies who may be headquartered in Europe and other countries. After the June 29 deadline is met, more details regarding disclosure of partnerships will be issued by gaming officials in July. Failure to comply with deadlines may result in delays in investigation procedures that would, in turn, postpone approval for a timely launch.

Under New Jersey’s online gaming statute, only the state’s casinos will be licensed to offer Internet gambling. The Borgata casino has already struck a deal with bwin.party. Caesars Entertainment owns several of the other Atlantic City brick and mortars. That leaves only a few other partnership opportunities for European online gaming operators.

Companies that miss out on partnership agreements have only one other option to participate in New Jersey’s online gambling scheme. That option would be to purchase a casino themselves. After Judge Batten’s recent ruling that allowed the Atlantic Club to wiggle out of its deal with PokerStars, that casino reportedly remains on the shopping block.

Earlier reports indicate that a few other casinos may also be available, as the boardwalk casinos have experienced six consecutive years of declining revenues. However, that revenue tailspin is likely to right its course and produce positive results once online gambling is firmly established in the state.

Earlier in June, New Jersey regulators officially published the state’s online gambling regulations and have allowed interested parties 60 days in which to comment on the legislation. If you’ll recall, Nevada also permitted such a comment period that resulted in the receipt of some solid advice regarding regulatory issues. One comment is believed to have led to the Silver State recently proposing an amendment that would permit international online poker partnerships.

While Nevda’a regulations are restricted to poker-only, New Jersey aims to offer a full slate of online casino gaming. The state’s 2014 budget has included projected revenue from such an endeavor, so meeting the launch deadline tentavely set for November 16 is crucial to New Jersey officials who hope that online sites are running smoothly and generating revenue prior to the start of 2014.

One Reply to “NJ Sets Deadline for November Launch Partnerships”