New Jersey gaming regulators have put off a decision on whether to allow the AGA to participate in PokerStars’ desire to purchase an Atlantic City casino. 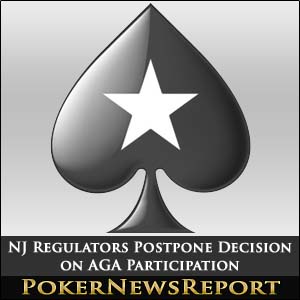 New Jersey gaming regulators have put off a decision on whether to allow the AGA to participate in PokerStars’ desire to purchase an Atlantic City casino.

The American Gaming Association strongly opposes the Rational Group, PokerStars’ parent company, from being permitted to acquire the Atlantic Club Hotel Casino and entering New Jersey’s online poker market. The AGA filed a petition with the state’s Casino Control Commission and Division of Gaming Enforcement asking to have a say in the licensing process and urging gaming officials to deny the purchase.

PokerStars fired back with a 15-page letter calling the AGA’s intervention a waste of time that is merely an attempt to eliminate competition. The AGA is the lobbying group for many of the country’s largest casinos. PokerStars cited its standing in the online poker industry, holding a number of licenses in countries throughout the world.

The Casino Control Commission had the matter up for a possible vote on Wednesday, but pulled it from the board meeting’s agenda. Matthew Levinson, chairman of the commission, told the pressofAtlanticCity.com that more time is needed to look into the issue before votes can be tallied.

No timetable was set for resolution of the matter, but in all likelihood it will take weeks before PokerStars’ suitability to hold a New Jersey gaming license will be determined.

PokerStars, meanwhile, is intent on getting feedback from at least one New Jersey poker player. The world’s top poker site has scheduled meetings with players who frequent the 2+2 online poker forum. PokerStars has done this in the past in order to see things from the player’s perspective.

The next round of meetings are scheduled for April 24-26 at PokerStars’ Isle of Man headquarters. The plan is for three 2+2 regulars to participate in the sit-down, with one of the three to be a resident of New Jersey. I think it’s safe to say that PokerStars fully expects to prevail over the AGA’s attempt to block their purchase of the Atlantic Club Hotel Casino and win the approval of New Jersey gaming officials.