New Jersey has projected online gambling revenue in 2014 to reach $180 million, a figure that is doubted by the Office of Legislative Services. 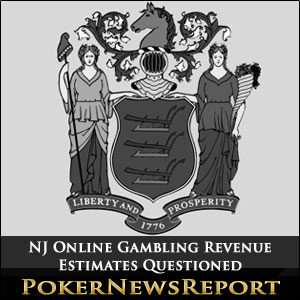 New Jersey has projected online gambling revenue in 2014 to reach $180 million, a figure that is doubted by the Office of Legislative Services.

The budget director of that nonpartisan office told nj.com that the Garden State’s take from online gambling will come in considerably less than that at only $30 million. Upon hearing that, New Jersey Governor Chris Christie stated that budget director David Rosen was “dead wrong” in his estimates and that he’s been way off in past projections.

One of the areas of concern mentioned in possible lower revenue totals include the fact that Atlantic City casinos have been delayed in the online gaming license application process. Another reason for a shortfall in revenue projections may be PokerStars’ courtroom defeat that saw its bid to purchase the Atlantic Club quashed.

PokerStars’ attempted purchase of the struggling casino was expected to pump some life back into the boardwalk’s land-based casino revenue totals, which have seen declining numbers for six consecutive years. In turn, the world’s top poker site would have likely also contributed heavily to the state’s overall online gaming revenue numbers.

Whoever the Atlantic Club’s new owner may be will undoubtedly end up being a boon to New Jersey gambling revenue. But the termination of the contract between owner Colony Capital and PokerStars means that the purchase will be delayed, thereby putting a dent in 2014 projections.

In an attempt to hit the projected numbers, the New Jersey Division of Gaming Enforcement has announced the hiring of a consultant to assist in the launch of online gambling. Mario Galea, who previously led the Maltese Lotteries and Gaming Authority (LGA), has signed on to help the Garden State in getting sites up and running by November, eGR reported.

Galea’s new role was announced at an East Coast Gaming Conference. As CEO of the LGA upon its formation in 2004, Galea was instrumental in establishing online gambling legislation. He stepped down from that position in late 2008.