Players from New Jersey will be able to exclude themselves from both live casinos and online play. 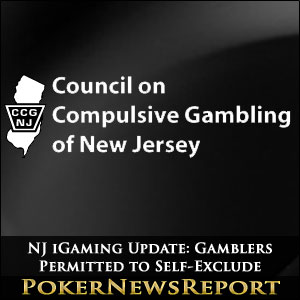 Players from New Jersey will be able to exclude themselves from both live casinos and online play.

In preparation for the launch of Internet gaming in New Jersey, the state’s has modified its self-exclusion policies. Now, if a player chooses to exclude themselves from an Atlantic City casino, he or she will also be prohibited from playing online. Those already on an Atlantic City casino self-exclusion list will be automatically excluded from the casino’s online counterpart.

NJ’s Division of Gaming Enforcement (DGE) has proven itself a staunch advocate of the new policy. In a statement reported by the Associated Press, DGE Director David Rebuck went on record stating:

Expanding the division’s self-exclusion program to include Internet gaming and making the application process available to the public prior to Internet gaming’s go-live date of November 26, 2013, represents a commitment I made following the signing of the Internet gaming bill.

The need for self-exclusions arose from the tendency of some players to become compulsive gamblers. Players from New Jersey are no exception to this rule, with many of its residents having already fallen victim to the allure of big wins, jackpots and unfathomable riches. Some have lost their entire life savings because of gambling; others have lost their homes, or even worse, their families.

The DGE is giving players plenty of ways to sign up for self-exclusion. They can do so at one of its divisional offices in Atlantic City and Trenton, at a New Jersey Racing Commission office in Trenton, East Rutherford, Freehold and Oceanport or online.

Some industry experts, such as former head of New Jersey’s Council on Compulsive Gambling Arnie Wexler, are concerned that online gambling will lead to a spike in compulsive behavior, primarily due to the ease in which gamblers will be able to access virtual casinos. Current Executive Director Donald Weinbaum believes that the self-exclusion list is a necessary step, and will serve its intended purpose of helping online gambling addicts.

As a further precautionary measure, anyone who signs up for self-exclusion is encouraged to speak with a professional using the 1-800-GAMBLER hotline or visiting www.800gambler.org.