NJ Aims to Lead the World in Online Gambling

The director of the New Jersey Division of Gaming Enforcement revealed that the state’s goal for its online gambling scheme is to be the best in the world. 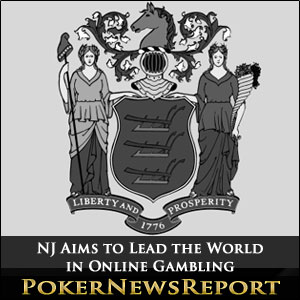 The director of the New Jersey Division of Gaming Enforcement revealed that the state’s goal for its online gambling scheme is to be the best in the world.

A November launch remains on schedule despite considerable demands made on Atlantic City’s 12 casinos to adhere to stringent timelines, the DGE’s David Rebuck told DiamondFlushPoker. He also expects the Garden State to set the standards in online gaming that other states will follow.

New Jersey was for decades considered the nation’s second-ranked destination for land-based gambling behind Las Vegas, Nevada. The state also lost that slot in recent times when casinos in neighboring Pennsylvania managed to overtake that position in brick and mortar casino revenue.

But expect New Jersey to play second fiddle (or third) no longer when it comes to online gambling. The Garden State is poised to rule the roost in Internet gambling and has listed several reasons how it anticipates accomplishing that goal.

Those reasons include a continued legal battle in hopes of being allowed to offer betting on sports, heavily promoting mobile gaming to attract gamblers on the go, allowing fantasy sports competition, and partnering with other states and countries in order to increase player pools.

While interstate compacts are often mentioned in regard to increasing liquidity for online poker, New Jersey plans also to combine with other states to offer progressive slot jackpots. Similar to the powerball lottery that is wildly popular among players in participating states, the slots jackpots will likely reach multimillion dollar prizes.

Nevada gaming regulators recently revealed that discussions regarding a Nevada-New Jersey online poker compact had taken place. While such a collaboration is likely to happen in due course, Rebuck did state that it is not yet the right time to forge an agreement of that nature.

A little more than three months remain before the anticipated late November online gaming launch in New Jersey. All systems are go for the roll out to commence in timely fashion. If all the Garden State’s goals are met, New Jersey will soon be the hub of Internet gambling for the U.S. and perhaps beyond.