Dominik Nitsche took the chip lead in the WSOPE Main Event in the final hand of Day 2 to deny Ludovic Lacay the overnight advantage as just 70 players remain. 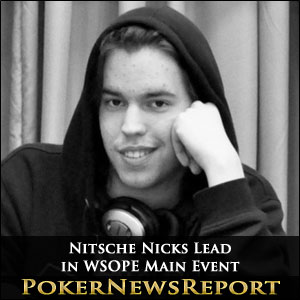 Dominik Nitsche took the chip lead in the WSOPE Main Event in the final hand of Day 2 to deny Ludovic Lacay the overnight advantage as just 70 players remain.

Day 2 of the WSOPE Main Event saw several fascinating encounters, many notable hands and a few famous faces leaving the tournament. For most of the six levels of action, Ludovic Lacay had continued where he left off on Day 1B – dominating his table and adding a substantial number of chips to the 163,075 chips he brought into Day 2.

However, the honour of being chip leader for the second successive day was taken from him in the final hand of Day 2 when, on a board of 8♣ 5♠ A♠ / J♥ / 5♦ Dominik Nitsche (pocket Queens) called a 61,200 chip bet on the River from Eric Sfez (8♠ 7♠) to collect a pot of almost a quarter million chips – the largest pot seen in the tournament to date.

Spindler Moving Up Into Contention

Dominik Nitsche and Ludovic Lacay are followed on the leaderboard by Benny Spindler; who recovered from having his Aces cracked by Ilani Ran (A♦ 2♦ > A♠ A♣ – Ran rivered trip Deuces) to later eliminate Ran Q♥ Q♠ > J♥ J♣ and then cripple Aku Joentausta in a huge pot after Spindler (A♦ 9♦) had flopped the nut flush.

Behind the leading trio, Fabrice Soulier moved into fifth position with the elimination of last year´s WSOPE Main Event winner Phil Hellmuth (A♦ K♣ > A♥ Q♠), while Phil Ivey was also bust from the tournament on Day 2 – running pocket Fours into the suited Queen-Jack combination of Igor Kurganov, which improved into a flush.

A far-more-subdued-than-usual Daniel Negreanu (115,100 chips) is still in the hunt for his sixth WSOP bracelet after nursing his short-stack through the early levels, doubling up against Jean-Michel Texier (K♣ 7♣ > A♣ J♥) when spiking the 4♣ on the River to complete his flush draw, and then rivering an Ace to eliminate Jeff Rossiter A♣ 9♣ > 4♥ 4♠.

Negreanu needs to finish in seventh place or higher in this tournament to win the WSOP Player of the Year from Matt Ashton, but current third place in the POY leaderboard – Loni Harwood – could have also made an impact on the competition had she not been eliminated from the Main Event A♠ Q♦ > A♣ 8♠ by Flavien Guenan.

231 players took their seats for Day 2 of the WSOPE Main Event after three late entries were received before play recommenced. Of those 231, just seventy players made it through the six 90-minute levels of play and will return to the Casino Barriere in Enghien-les-Bains today with the aim of making it into the final 16.

Players who finish within the top 40 positions are assured of a €20,250 min-cash, while the first prize for the winner is a whopping €1,000,000 and a coveted World Series of Poker bracelet. Those players with the best chance of being in the money when the bubble bursts later today include:-