Dominik Nitsche ran through the field on Day 3 of the World Poker Tour Main Event in South Africa to take a commanding chip lead to the final 6-handed table. 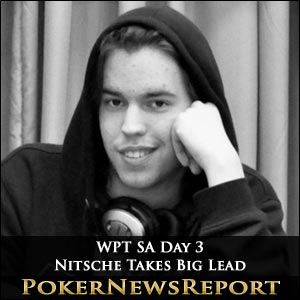 Dominik Nitsche ran through the field on Day 3 of the World Poker Tour Main Event in South Africa to take a commanding chip lead to the final 6-handed table.

There are some days when you just run hot – and Day 3 of the WPT Main Event at the Emperor´s Palace Casino in Johannesburg was a very hot day for Dominik Nitsche. The likeable young German player absolutely dominated the second half of the penultimate day – eliminating six players in-a-row on his way to controlling 42 percent of the chips in play when the 6-handed final table gets underway later this afternoon.

With all 27 players taking their seats on Day 3 guaranteed a min-cash of $6,626, there was no hanging about when the cards were in the air. Jason Strauss (A♠ 10♠) was a lucky boy to improve his chip stack in the first hand of the day – coming from behind against the trip Kings of Feng Guang Li (A♥ K♣) to river a spade flush – and then on the adjacent table Andrew Anthony (J♠ J♦) doubled up against the A♠ K♠ of Aston Soon Shiong.

Jerome Bradpiece also benefitted from some of the early action – doubling up with A♠ A♦ against Dominik Nitsche´s A♣ K♣ – however, by then, Nitsche had already taken the chip lead from Ryan Price when rivering a Full House in a valuable pot against Price´s flopped straight. Ryan Price got some chips back when eliminating David Dadic (A♠ A♣ > K♣ K♠) in twenty-first position, but Dominik Nitsche was in full flight by then and nearly out of sight as chip leader.

With the fortunate pot against Ryan Price and the elimination of Menesh Keshev (J♣ 10♦ > A♠ 5♦ – Nitsche´s Jack paired on the flop), Dominik Nitsche was fast approaching a million chips. He flew past that benchmark when forcing the dangerous Wesley Weigand out of a 400,000 chip pot, and then set off on a one-man destruction derby.

There was one more elimination to go before the final table of 6 was set and, for a change, somebody else caused the damage – William Ross booking his second place in the chip counts when Day 1B chip leader Sunil Devancher (A♠ 10♠) could not quite make his flush or straight draws and was seen off in seventh by Ross´ A♣ Q♦.

Looking Ahead to the Final Day

Is there any stopping Dominik Nitsche? With the exception of Wesley Weigand, the other four players appearing on the final table all won flips in the last full level of the day to keep their tournament alive – Andrew Anthony working his last 2 BBs up to a stack of 365,000 chips. They say that there are no certainties in poker, but will anybody be able to prevent the Nitsche powerhouse from capturing his first World Poker Tour title and $206,000 first prize?