Nir Levy bet his way to the top of the chip counts before the close of play to lead the final table of the Estrellas Poker Tour Main Event in Barcelona. 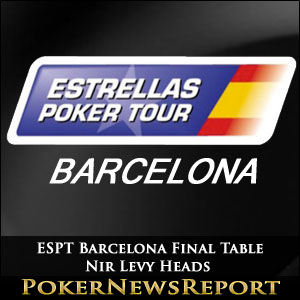 Nir Levy bet his way to the top of the chip counts before the close of play to lead the final table of the Estrellas Poker Tour Main Event in Barcelona.

Day 3 of the Estrellas Poker Tour Main Event in Barcelona saw just nine players survive from the 110 that took their seats at the Casino Barcelona at the start of the day, with the field headed by Israeli poker player Nir Levy – a “regular” on the Eureka Poker Tour, but a player rarely seen this far west!

Levy bet his way to the top of the chip counts in one of the last hands of the night, when he forced a massive fold from Spaniard Daniel Barriocanal on a board of 7♠ 8♠ 7♦ / Q♦. With over 2 million chips in the pot after the flop, Barriocanal bet 1.58 million following the Queen on the Turn, to which Levy responded by moving all-in for his last 6 million chips. Barriocanal felt that was too much to pay to see Levy´s cards and threw his cards into the muck.

Navarro Comes off Worse in Three-Way Battle for Lead

Prior to that hand, Daniel Barriocanal had been the massive chip leader with more than 11.5 million chips – chips he had won after coming out on top in a day-long three-way battle for the chip lead between himself, Mattias Ruzzi and Emilio Navarro.

For most of the day Argentinean poker player Mattias Ruzzi had been forcing the pace – completing a nut flush draw with A♥ 3♥ against the Russian poker player Andrzej Lacwik early in the day, and then seeing his A♦ K♦ improve to a Full House against Alexander Glunz’s missed open-ended straight draw.

Barriocanal had kept within reach of Ruzzi by busting out Andrea Dato K♥ K♦ > A♠ K♣ and Daniel Coloma (who had previously eliminated Annette Obrestad) A♣ 10♣ > J♥ 9♥, and then taking the last of Alexander Glunz´s chips with pocket Kings > Glunz´s pocket Jacks.

However, Navarro took over at the top of the chip counts during the eighth level of play when busting out Javier Martinez with pocket Queens and then doubling up against Barriocanal K♠ 2♠ > A♥ J♥ when Navarro flopped two pairs and Barriocanal could not find a fifth heart to complete his flush draw.

Barriocanal recovered when pulling off a stunning bluff against Navarro with A♥ 7♦ on the board of K♦ Q♣ 8♥ / 4♥ / Q♠ and then busting Angelo Penate in sixteenth place A♠ K♣ > A♦ J♥. Navarro was eventually bust in tenth place when Hakim Guitoun´s pocket Sevens improved to a set on the flop against Navarro´s A♦ Q♣.

Behind Levy, Barriocanal and Guitoun, there is a wealth of talent, including UK poker player Simon Hemsworth, Canadian journeyman Andrew Chen (who started day 3 with just 300,000 chips) and last woman standing Corinne Bauche – who survived a scare in the last level of the night when her A♥ J♥ spiked a pair of Jacks to best Daniel Barriocanal’s A♣ K♠.