Nine Players Remain in WSOP Big One for One Drop

Rick Salomon leads the remaining field of nine players in the 2014 WSOP $1 million buy-in Big One for One Drop that promises $15.3 million to the winner. 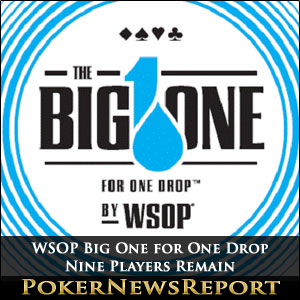 Rick Salomon leads the remaining field of nine players in the 2014 WSOP $1 million buy-in Big One for One Drop that promises $15.3 million to the winner.

After two days of action, 33 players of the 42 who bought in have been eliminated. None of those have anything to show for their efforts, except perhaps a bad beat story and regret at dumping $1 million. On the other hand, those who can afford a seven-figure entry fee likely won’t miss the money now that it’s gone.

After one more elimination on Day 3 today, the final eight players will walk away with a profit. Eighth place is guaranteed over $1.3 million, with escalating totals for each player who manages to finish higher among the eight in-the-money slots.

Watching from the rail when play resumes today will be 2012 Big One For One Drop winner Antonio ‘The Magician’ Esfandiari. His magic failed him on Day 2 as he was bounced from the tournament in 10th place despite having the chip lead on more than one occasion. His $18 million first place prize two years ago in the same event will remain the largest in poker history, at least for the time being.

Perhaps the third edition of the Big One for One Drop, whether it is held next year or follows the current trend of skipping a year, will create a bigger prize pool. However, WSOP event organizers had set a cap of 56 players for this year’s $1 million buy-in tourney and missed that mark by 14 players.

Also no longer seated this year is UK’s favorite son, Sam Trickett. A second place finish behind Esfandiari two years ago boosted his bankroll by some $10 million. Trickett had the most chips to begin Day 2, but coming out on the short end of some crucial all-ins did him in and resulted in a 15th place finish. Trickett will also be on the sidelines today, but may be busy preparing celebrations for his 28th birthday tomorrow.

Day 3 of the Big One for One Drop kicks off at 3:00 p.m. today. PokerNewsReport will bring you the results of today’s action tomorrow, so make sure to check this space again to find out what went down on the live felt in the second richest tournament in poker history.