Liakos will start Day 3 of the PokerStars European Poker Tour (EPT) Tallinn main event with a healthy chip lead after winning a massive pot late in the day. 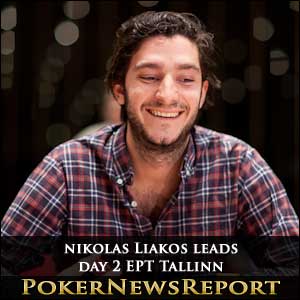 Sweden’s Nikolas Liakos will start Day 3 of the PokerStars European Poker Tour (EPT) Tallinn main event with a healthy chip lead after winning a massive pot late in the day in the Estonian capital city.

Nikolas Liakos bagged up on 460,200 to sit ahead of second-placed Finn Lari Sihvo (400,100) after cracking the pocket aces of local favourite Henri Kasper in the second-last hand of Day 2 of the €4,250 buy-in No-Limit Texas Hold’em event at the spectacular Swissôtel.

The 198 Day 1 survivors returned for some fast and furious action in Europe’s City of Culture, but only 63 were left in contention after six levels of play.

Liakos started Day 2 on 86,000 chips, but had moved above 250,000 by the end of the first few levels. That is just about where he remained for the remainder of the day – until the final level, when he soared way above the average chip stack of 134,385.

The Swede suddenly seemed to find a different gear as the day drew to a close to move well ahead of Sihvo – mainly thanks to his massive win against Kasper with just two hands left to play.

Kasper was more than happy to shove all-in pre-flop with his pocket aces, but was left shellshocked as Liakos flopped a set of fours to zoom up the leaderboard into first place.

While Liakos was truly apologetic, Kasper just looked bemused as he left the table with just 76,100 chips remaining in 44th place.

Only Liakos and Sihvo have broken through the 400,000-chip barrier so far, but PokerStars qualifiers Michael Graydon (349,800), of Ireland, and Lithuanian Liutauras Armanavicius (337,600) – in third and fourth places respectively – and Jani Sointula (333,300), of Finland, are not too far behind as they complete the top five.

The last two levels of the day saw several players make a move to gain the chip lead, but some of the most exciting action was seen a bit lower down the chip counts list.

Incredibly, following a few hours of playing both tables, he had secured a third place finish in the Omaha event for €17,812, but had seen his main tournament chip stack shrink to 37,250.

However, he produced a Day 2 display of patience and aggression to move well above the average chip count and could be a very dangerous opponent now that he is basically freerolling.

But Meidla’s fabulous performance wasn’t the only interesting story during the main event as Dutch online pro Johan ‘busto_soon’ van Til somehow managed to end Day 2 in 16th place on 199,000.

Why is that particularly noteworthy? Well, Van Til started the second day with just 5,300 chips to be the short stack, but then battled his way through an extremely tough table that included the likes of Team PokerStars Pro Ville Wahlbeck, Matt Frankland, Jani Sointula and Praz Bansi to bring himself right back into contention for the €275,000 (£240,000) top prize.

Then there’s also our final two former EPT champions in Britain’s Roberto Romanello (40th on 80,800) and the last remaining Team PokerStars Pro in Frenchman Arnaud Mattern (50th on 58,200), who will both be aiming to create a little bit of history by becoming the first double EPT champ.

Day 3 will see the field reduced to 24 players, with organisers expecting five levels of 75 minutes to do the trick.