High stakes cash game player, Niklas ‘ragen70’ Heinecker, took down the biggest open tournament ever to be played outside Vegas after a sensation day´s action. 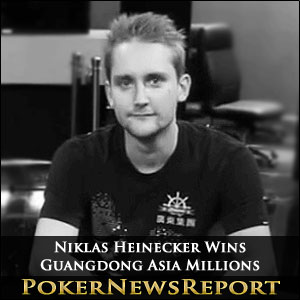 High stakes cash game player, Niklas ‘ragen70’ Heinecker, took down the biggest open tournament ever to be played outside Vegas after a sensation day´s action.

Anybody who had the time yesterday to watch the GDAM final table webcast on PokerStars.tv was treated to an absolutely breathtaking three hours of tension. With such substantial jumps in the payout structure, any wrong decision could cost one of the remaining eight players anything up to $1.3 million – while the reward for getting it right – and winning the GuangDong Asia Millions Main Event – would be almost $4.5 million!

When play started yesterday at the PokerStars City of Dreams in Macau, blinds were 500,000/1,000,000 (ante 10,000) meaning that the average chip stack was just 13 Big Blinds. With chip leader Sorel Mizzi having just 28 BBs and such a clever/crazy/incomprehensible blind structure, the action happened thick and fast right from the start.

How is This for the Start to a Final Table?

Isaac Haxton (Q♠ 7♦) shoved in hand 4, but this time was called Zheng Tang (K♣ J♣) made the call, and Isaac looked favourite to be the first player eliminated from the GDAM final table, until the 7♥ landed on the flop and gave Haxton a much needed double-up. Anson Yan Shing Tsang got his five Big Blind shove through in the next hand, and in hand Nº 6 we lost our first player.

Igor Kurganov (Q♠ 7♥) in the Small Blind shoved for a second time, and was called in the Big Blind by Pratyush Buddiga (8♦ 8♠). This time the player at risk had the better hand, but the Q♣ on the flop put paid to Buddiga´s aspirations of a $4.5 million dollar payday, and he was bust from the tournament in eighth.

Rossiter on the Rise

Jeff Rossiter had made a comparatively quiet start to the final table of the GuangDong Asia Millions, but in two hands he had catapulted himself into the chip lead. In the first, he eliminated Anson Yan Shing Tsang in seventh place (K♣ 10♦ > A♥ 6♣) when the 10♠ was dealt on the flop and the 10♣ on the river sealed the deal.

Then he overtook Sorel Mizzi in the chip lead, when calling the Canadian´s K♠ 10♣ with his A♦ A♠ and enjoying that smug sensation when the first card dealt on the flop is the A♣.

By the end of the first level of the day, Jeff Rossiter had built his stack to over 30 million chips, while overnight chip leader Sorel Mizzi had seen his chip stack decline to 15 million chips and the eventual winner of the tournament Niklas Heinecker was the shortest stack of all.

Isaac Haxton had been clinging on for dear life after doubling up Niklas Heinecker A♣ 5♠ > 10♦ 10♥ in the first hand back from the break, and had himself doubled up his one big blind against Igor Kurganov before the Russian was eliminated (8♥ 6♠ > 10♣ 4♦) and then incredibly taken chips from Zheng Tang in a 6♦ 2♥ > A♣ 10♠ hand after Tang had flopped a pair of Aces and turned two pair, only for Haxton to river a diamond flush.

Unfortunately for Haxton, he was not to be third time lucky with his all-in bets, and Zheng Tang gained his revenge for the earlier bad beat when sending Haxton to the rail in fifth place A♠ Q♥ > J♠ 3♥ (Haxton actually ended up in the PokerStars.tv commentary box and did a very good job throughout the rest of the broadcast).

The Rollercoaster that is Zheng Tang has Left the Building

Zheng Tang – resplendent in his grey puffer jacket (in Macau!) – had been an incredibly formidable opponent on the final table, but had an absolute rollercoaster of a ride before being eliminated from the GuangDong Asia Millions Main Event in fourth.

After busting out Isaac Haxton in fifth, Tang had accumulated more than 30 million chips (Jeff Rossiter was still chip leader with around 50 million chips), but half of his stack went to Sorel Mizzi (Q♦ 9♠ > K♥ J♣) in one hand before Tang doubled back against Mizzi 10♣ 10♠ > A♣ Q♦ in the next.

However, Tang was to fall out of the GDAM Main Event in fourth after doubling up Niklas Heinecker (10♦ 7♦ > A♣ 8♣ – Heinecker caught the 10♥ of the flop) and then elevating the German into the chip lead when Tang shoved his 5♣ 5♠ into Heinecker´s A♦ K♦ and the A♥ was the first card out on the board.

No Deal at the Business End as Heinecker Storms to Glory

Unlike the majority of recent high-profile, high-value final tables, there was no deal made during the three-handed play or during the heads-up. Indeed, there was hardly any time to talk about money!

Within 10 minutes of Zheng Tang leaving the building tournament, Sorel Mizzi was on his way to the Cashier´s window after running his K♥ 7♣ into the pocket Sixes of Niklas Heinecker (the pair improved to a set on the flop) and the heads-up between Jeff Rossiter (34,850,000 chips) and Niklas Heinecker (80,150,000) only lasted three hands.

In the deciding hand of the GuangDong Asia Millions Main Event, Niklas Heinecker limped in from the Small Blind with A♥ 9♥ and Jeff Rossiter (Q♦ 10♠) shoved from the Big Blind. Heinecker made the call and the cards were on their back.

The flop of K♥ 5♦ 4♣ was of no help to Rossiter and the Turn 3♦ and River J♠ failed to improve his hand – meaning that Niklas Heinecker was the GuangDong Asia Millions Main Event champion and winner of HK$34,600,000.

FOOTNOTE: If you get the opportunity and have the time, tune into PokerStars.tv and watch the re-run of the GDAM Final Table. It was truly gripping and Niklas Heinecker is a worthy champion.