Nik Stylianou is King of the East End Live II

Nik Stylianou is becoming something of a London poker specialist, having taken down his third live poker tournament in the capital in little more than a year. 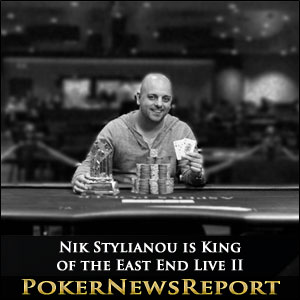 Nik Stylianou is becoming something of a London poker specialist, having taken down his third live poker tournament in the capital in little more than a year.

While many minor poker celebrities were slumming it in Monaco for the EPT Monte Carlo, the cream of the UK´s poker fraternity gathered in Aspers Casino at the Olympic Stadium for Blackbelt Poker´s $50,000 guaranteed “East End Live II”.

Black Belt ‘Bounties’ Kevin Williams, Richard Ashby, David Pomroy, Chaz Chattha, Annabel Jones and Neil Channing were joined by 181 other players – who either ponied up the $225.00 buy-in, qualified for the event through the live satellites hosted at Aspers or won their seat online – including James Dempsey, Joe Beevers and the magnificently named Lukas Consolin Bezerra De Campos (known as ‘Luke’ to his friends).

Stylianou Chips Up Throughout Day 2

After two Day 1s on Friday and Saturday, 89 survivors took their seats for a very long conclusion to the tournament on Sunday – with only the top 45 players due to cash in the event. Nik Stylianou was one of those who would need to improve dramatically to make the short trip from Islington worthwhile, having got through Day 1B with a below-average chip stack of 59,200 chips.

Things started going well for Nik just prior to the bubble. Having been dealt pocket Aces in the big blind, he had two players in front of him shove with 10-8 and 5-5, and was able to chip up towards the top of the chip stacks as the tournament entered the money. By the time nine players were left and the event had reached its final table, Nik had chipped up to 385,000 chips – but was a mile behind big chip leader Dan Whittaker.

With blinds of 5,000/10,000 (ante 3,000), it was not long until the two shortest stacks at the table took their chances with marginal hands – and both were eliminated. Lee Brook-Pearce´s demise came with A♥ J♥ against the 5♣ 5♦ of Mark England while Michael Brock just failed to complete his flush with A♥ 2♥ and was bust by the dominating A♣ J♥ of Dan Whittaker.

Nik Stylianou captured the valuable scalp of George Anchillea when his J♥ J♦ flopped a set on the turn, and Carlo Hassan could not improved his pocket Tens to get past Craig Connaughton´s pocket Queens and was eliminated in sixth. Dan Whittaker´s dominance of East End Live II continued when he bust Craig Connaughton in fifth (A♦ K♣ > A♠ Q♥) and, going into four-handed play, Whittaker owed 55% of the chips in play.

Mark England, who was on a $10,000 bonus WSOP Package if he won the event, was unlucky to be demolished and eliminated in two hands. In the first, England (K♥ J♥) called Jim Parberry´s all-in shove with J♠ 6♦, but the 6♠ on the flop gave Parberry a double up; and then England shoved his last remaining chips (about 10 BBs) with A♥ 7♣ into Dan Whittaker´s A♦ 9♠ and was sent to the rail in fourth.

Jim Parberry´s recently acquired chips did not extend his tournament life for much longer. Parberry (A♥ 9♣) shoved all-in following the flop of 6♠ 6♦ 7♦ and was snap-called by Nik Stylianou (10♦ 8♦). Parberry was ahead – but Stylianou had plenty of outs – and, when the turn 2♦ completed Stylianou´s flush, Parberry was gone in third.

A deal was negotiated before the heads-up that would see Dan Whittaker (2.350 million chips) and Nik Stylianou (1.950 million chips) split the first and second place prize money and leave £500 to play for. The first confrontation at the climax of East End Live II saw a A♠ 9♥ -v- A♦ 9♠ chop, but Stylianou soon got the double up he needed when his 10♣ 7♠ rivered a flush to best Whittaker´s trip Fives.

Now in the chip lead, Nik Stylianou took control of the game and built a 5:1 chip advantage when both players rivered a straight – Whittaker´s 2♦-6♣ straight being bested by Stylianou´s 3♥-7♥ straight. A demonstrably tired Dan Whittaker seemed to give up hope thereafter, and shoved his last 750,000 into the middle of the table with 4♥ 2♣. Nik Stylianou´s K♦ 8♥ paired the Eight on the flop, and that was enough to give the Londoner victory in East End Live II.