The six-handed final table of the PartyPoker WPT Merit Classic is set, with Nicolas Chouity the clear chip leader after a devastating performance on Day 4. 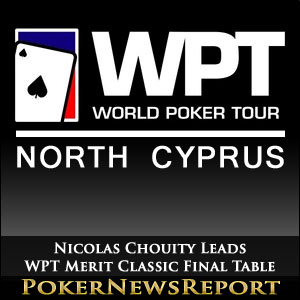 The six-handed final table of the PartyPoker WPT Merit Classic is set, with Nicolas Chouity the clear chip leader after a devastating performance on Day 4.

The penultimate day of the PartyPoker WPT Merit Classic was filled with drama from start to finish. It began with the chip leader changing hands in one of the first pots of the day and concluded with Aces getting cracked to set the final table.

Throughout the six levels of action that took place on Day 4, the day was dominated by Aces and Queens – sometimes leading to victory in substantial pots, other times leading to an exit from the event. At the conclusion of the action, Nicolas Chouity will have a substantial advantage when play resumes at the Merit Crystal Cove Hotel and Casino in Cyprus later today.

Coming into the penultimate day, the thirty remaining players were headed by Antonio Buonanno; however the chip lead was to change in one of the first hands of the day when, after the flop of J♥ 8♠ 7♦, Buonanno announced he was all-in with a pair of Kings. Oliver Price quickly made the call with 10♠ 9♠ having flopped a Jack-high straight and, with no help from the Turn (6♣) or River (8♥), Buonanno had lost half of his chip stack and Oliver Price shot to the top of the leaderboard.

Players fell in quick succession during the first level of play (Level 20) – Antonio Buonanno starting his recovery by eliminating Dmitry Bayramov in thirtieth place and Markus Ross busting out Nuri Kural 9♠ 4♠ > J♥ J♣ after flopping a pair, making a set on the Turn and improving to a Full House on the River. Andrii Nadieliaiev was also an early casualty (A♦ Q♣ < Eddie Maksoud´s K♥ K♦), as was Oleksandr Gnatenko who ran 10♦ 9♦ into Paolo Petrucci´s pocket Aces.

Mixed Fortunes for Players with Ace-Queen

The opening hand combination of Ace-Queen is widely acknowledged as one of the most expensive hands in Texas Hold´em poker, and yesterday several players found out why. Just after Dmitry Gromov had bust Sofia Lovgren with A♥ Q♦ > J♠ 10♦, Markus Ross doubled up against Serdar Saglum 5♠ 5♣ > A♦ Q♦. Ross then spiked an Ace on the River to bust Vitaly Zholudev A♥ Q♦ > 8♠ 8♥, before Serdar Saglum was again dealt Ace-Queen – this time his Queen pairing on the flop to eliminate Marco Tommasino A♠ Q♣ > A♣ 8♠.

The random fortunes of Ace-Queen continued into Levels 21 and 22 – Andrejs Perederejevs sending Yuri Salikaev to the rail with A♠ Q♠ > A♥ 5♥, before Christian Christner flopped trip Fours to eliminate Evgeniy Starikov 6♠ 4♠ > A♦ Q♠. Fours also played a role in Abbas Morady´s departure – Igor Devkin turning trip Fours to bust Morady K♥ 4♥ > A♣ Q♣ and, as the last ten players congregated around one table, Antonio Buonanno ran A♦ Q♥ into Christian Christner´s pocket Aces to suffer another major setback to his chip stack.

One noticeable absentee from the ten-handed unofficial final table was Oliver Price. Price had enjoyed little good fortune since doubling up against Antonio Buonanno in the first level, and his misfortune continued when calling Nicolas Chouity´s A♥ K♠ shove with Q♥ Q♠. The flop of Q♦ 10♦ 5♦ was excellent for Price, but the J♦ landed on the Turn to give Chouity a Broadway straight, and Oliver Price was eliminated in eleventh place.

The official final table was set after four quick eliminations. Nicolas Chouity increased his chip lead by busting out Christian Christner in tenth place A♥ 8♥ > J♣ 7♦, before Antonio Buonanno was crippled by Ori Miller K♥ K♣ > J♦ J♠ and then lost the last of his chips to Igor Devkin A♥ A♣ > Q♥ 7♥. Nicolas Chouity then eliminated Dimitrios Ballas in eighth place J♥ 3♥ > A♥ Q♦ (!) when rivering a Jack-high straight, before Alexander Nudin got his Aces cracked in the last hand of the night by Alexander Lakhov (K♥ 9♥ > A♣ A♦) when Lakhov flopped an Ace-high flush.

When play resumes this afternoon at the Merit Crystal Cove Hotel and Casino, there will be about 30 minutes remaining in Level 26 (blinds 20,000/40,000 – ante 5,000). Play will continue until one player has their hands on the WPT trophy and winner´s cheque for $325,400, with the final table chip counts as follow: