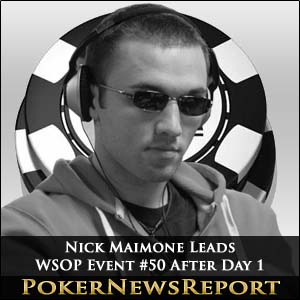 North Carolina’s Nick Maimone holds the chip lead after Day 1 of the $5,000 buy-in No-Limit Hold’em event #50 at the World Series of Poker (WSOP) in Las Vegas.

As is expected, numerous big-name pros hit the rail on Day 1, including early casualties Antonio Esfandiari, Vanessa Rousso, Joe Serock, Christian Harder, Layne Flack, Fabrice Soulier and Jason Mercier, while Lex Veldhuis also hit the rail early when he shoved all-in with 8♠ 6♠ on a flop of 6♥ 8♣ K♥. His unknown opponent called to show Q♥ 8♥ and spiked a heart on the river for a flush.

Jennifer Tilly Out On Day 1

The Swedish star busted fairly soon after registering when shoving all-in with 10♣ 8♣ after the turn card of a 6♣ Q♣ 10♥ Q♥ board. His unnamed opponent (again!) turned over A♠ Q♦ for trips and the knockout.

However, San Francisco’s Galen Hall fared far better to end the day in sixth place on 129,800 chips after taking down one of the day’s biggest pots when his 10♠ 10♦ became a set to beat his opponent’s overpair.

A total of 117 places will be paid at least $8,939, so it shouldn’t be too long before the money bubble bursts today.