Semi-pro player Nick Jivkov enjoyed an “amazing feeling” when pocketing $189,818 and a first gold bracelet by winning event #5 of the World Series of Poker (WSOP). 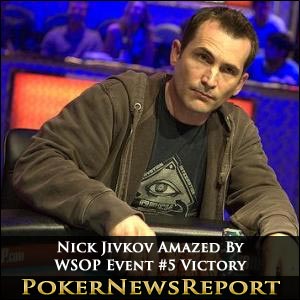 Semi-pro player Nick Jivkov enjoyed an amazing feeling when pocketing $189,818 and a first gold bracelet by winning event #5 of the World Series of Poker (WSOP).

The Bulgarian-born player, who now lives in Illinois, outlasted 638 other players in the $1,500 buy-in Pot-Limit Hold’em tournament to take the biggest chunk of change from the $862,650 prize pool – even seeing off big-name pros such as Daniel Negreanu, Tommy Vedes and John Eames at the nine-handed final table.

Ultimately, though, he came face to face with New Hampshire’s Bryan Pellegrino in a heads-up clash in the Rio All-Suite Hotel & Casino that saw the runner-up leave with $117,199 – once Jivkov had scored the final elimination of the tournament after two tough levels of play.

The 34-year-old – who has enjoyed great success on the WSOP Circuit with 10 cashes, including victory at Biloxi’s IP Casino Resort & Spa in 2010 for his first gold ring – hadn’t even cashed in a WSOP event before his victory, making this success all the sweeter as it had been 15 years in the working.

Jivkov was worried about how this summer’s WSOP would go for him, having suffered a poor 2011 series. But the businessman entered a $235 buy-in deepstack event only a few hours after arriving in Vegas to end up as winner for about $14,000, so was convinced that he should take part in event #5 instead of a tournament elsewhere. Now, that was a good decision.

Jivkov might have been slightly concerned as he was now facing one of the toughest heads-up players in Pellegrino, but remained calm as he kept chipping away at his opponent’s stack, eventually realising that this thing was mine.

Two hours passed before Jivkov could be crowned as a WSOP champion, though, with the final hand seeing Pellegrino move all-in while holding J♥ 9♠ and Jivkov call to show 10♥ 10♣. The flop came down Q♥ K♠ 8♠ to change little, while the 7♣ turn and 2♣ river confirmed that Jivkov had beaten a stellar final table to become champion.

Jivkov – who had been working really, really hard on his game – is already aiming for more Vegas success, stating that to finally win a bracelet… is just surreal, but reckons that, while this is his first triumph, he believes there’s more to come and maybe some even this summer.

The majority of railbirds had gathered to see if Team PokerStars Pro Negreanu could collect a fifth bracelet. But, of course, the Canadian star fell four places short when exiting in fifth place for $41,683 at the hands of Jivkov to leave many fans disappointed.

Negreanu moved all-in with A♦ Q♠ for a massive advantage over Jivkov’s A♣ J♥ and remained ahead until a heartbreaking river card. The board read 10♠ Q♣ 9♥ 2♥ by the time the turn card was dealt, but the K♣ river completed Jivkov’s straight for the elimination.