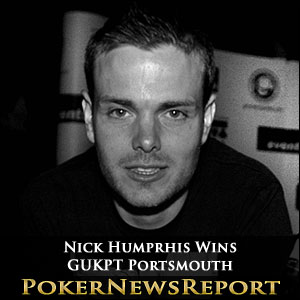 Leg 4 of the Grosvenor UK Poker Tour was played over the weekend at the Grosvenor G Casino in Portsmouth´s Gunwharf Quays and, after a titanic heads-up battle, victory went to local player Nick Humphris – although it was his opponent who went home with the more valuable cheque due to a deal made at the final table.

134 players paid the £500 buy-in or qualified for the GukPT Portsmouth Main Event – smashing the £50.000 guarantee and (prior to the heads-up deal being made) offering a first prize in excess of £20.000 to the winner. Despite the good numbers, play was cut short on Day 2 as the nine-handed final table was reached with more than a level of scheduled play to go.

The nine remaining players were reduced to just four within an hour of play resuming at the G Casino. Morgan Sorfleet was first to depart – being out-kicked AQ > Q8 on a Queen high board by Khalick Mohangee – and Mohangee was responsible for the second elimination of the day, when he rivered a straight to bust Dennis O´Mahoney 77 > QQ.

Trevor Bowers left the GukPT Portsmouth Main Event in seventh when he shoved his pocket Twos into the Aces of Dom Mahoney, and the ‘Mahoney Train’ carried on rolling as he sent Adam Boutwell to the rail in sixth (AK < K10) and Blair Hampton off to the cashier´s window in fifth (KK > AK).

By the time the second level of the day started (Level 20 – blinds 6,000/12,000 ante 1,500 chips), each of the four remaining players were in with a chance of winning the GukPT Portsmouth title.

However, within 20 minutes of Level 20 starting four became two, as Dom Mahoney out-kicked Khalick Mohangee (that´s Karma for you) J♣ 9♣ > 7♦ 9♠ – when both players had flopped trip Nines – and then flopped a Two to come from behind and eliminate Simon Skinner in third A♣ 2♣ > A♥ 4♦.

Despite taking a 1.6 million -v- 800,000 chip advantage into the heads-up, Dom Mahoney was unable to continue his domination of the final table. Nick Humphris was continually chipping away at the big man´s stack and at one point drew level in chips when his QJ paired on the flop to best Mahoney´s A10.

Mahoney pulled back into the chip lead during the next level when he rivered a straight to beat Humphris´ pocket Kings, but Humphris reversed the chip counts when he took down a half million chip hand with trip Tens and then twice forced Mahoney out of big pots with all-in shoves.

Humphris called Mahoney´s 225,000 chip river bet in a pot already in excess of ½ million chips – despite believing that his opponent may have made a flush draw – and was rewarded with a 2 million -v- 600,000 chip advantage when Mahoney´s bluff failed and Humphris tabled K5 for two pairs.

Within ten minutes of that pivotal hand, the tournament was over when Dom Mahoney shoved the last of his chips with pocket Sevens into Nick Humphris´ K♣ K♠, and failed to find the two-outer he needed to survive. Nick Humphris was the winner of the GukPT Portsmouth Main Event and took home the champion´s trophy, a seat in the GukPT Grand Final and £16,500 after a final table deal.