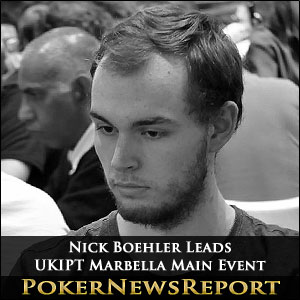 The action on Day 1B of the UKIPT Marbella was practically a mirror image of the preceding day. 61 ‘alternatives’ joined the 350 players who had registered for the event, two thirds of the field lost their chips before the day ended and a chip leader emerged from nowhere in the last hands of the night.

Little is known about the chip leader – other than he earned his seat at the event via an online qualifier like so many others – but he takes a colossal stack of 231,700 chips into Day 2 of the UKIPT Marbella, eighteen big blinds ahead of yesterday´s chip leader Andrey Vladimirovich Shubin.

The massive combined field of 763 players smashed the €500,000 guarantee put up for the event by PokerStars, and the winner of the tournament is going to walk away with €158,200 – the biggest first prize for a UKIPT Main Event awarded outside of London and the record-breaking UKIPT Nottingham.

Eighty-eight of the remaining 240 players will return from Marbella with something in their pockets but, like yesterday, few of those will be well-known stars of the professional poker circuit – with both of yesterdays Pokerstars Pros Grzegorz “DaWarsaw” Mikielewicz and Leo Margets busting out of the tournament.

The Anglo-Iberian rivalry which was a feature of Day 1A´s action continued into Day 1B – fuelled by Juan Manuel Pastor´s incendiary early morning Tweet “Today airsoft against England at # ESPTMarbella. Only I promise, blood, sweat and tears.” He later tweeted a picture of a very bloody arm after being shot by an English “werewolf” and decried the lack of silver bullets to shoot back at the “guiris” (a non-complimentary word for foreigners).

At the tables, it was a slightly better day for the Spanish, with Asier Crespo leading the home charge and finishing the day with 171,900 (the UK´s top performed on Day 1B was Mark Goodchild with 142,000 chips), but there is a very strong contingent of UKIPT regulars bubbling under the top chip counts including Chaz Chattha (79,000 chips), Martins Adeniya (37,000 chips) and Surinder Sunar (33,500 chips).

Looking Ahead to Day 2 of the UKIPT Marbella Main Event

When play resumes at the Andalucia Plaza Hotel in Marbella this afternoon, the game will be entering Level 11 (blinds 800/1,600 – ante 200). Ten further levels are scheduled for today and the bubble is expected to be burst on Saturday. Those with the best chance of returning from Marbella with more than a sun tan include:-