Nguyen and McEvoy Inducted into the Poker Hall of Fame

World Series Champions Scotty Nguyen and Tom McEvoy were selected by the Poker Hall of Fame Governing Council as the class of 2013. 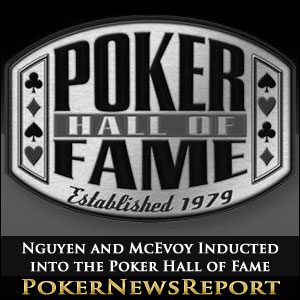 World Series Champions Scotty Nguyen and Tom McEvoy were selected by the Poker Hall of Fame Governing Council as the class of 2013.

This fall, the Poker Hall of Fame Governing Council faced the unenviable decision of choosing two out of the ten players eligible for induction into the Poker Hall of Fame. Among the finalists were multiple WSOP Main Event winners, ambassadors of the game and pros who have yet to be swept under the rug by the swarms of young, talented players. But in the end, the Council chose to recognize the old guard, announcing that Scotty Nguyen and Tom McEvoy are this year’s inductees.

The pairing will be inducted on November 3rd at the Rio in Las Vegas. Not surprisingly, the ceremony will be included as part of the WSOP Main Event festivities. Nguyen and McEvoy will be the 45th and 46th inductees nominated into the Hall of Fame.

Nguyen and McEvoy were chosen from an exclusive finalist field which included the likes of Humberto Brenes, Chris Bjorin, David Chiu, Thor Hansen, Mike Matusow, Jennifer Harmen, Chris “The Matador” Mortensen and Huck Seed. The ten finalists were nominated by the public. Then, a 37 member panel comprised of current Poker Hall of Fame members and recognized members of the media were charged with choosing a maximum of two inductees.

McEvoy, in particular, expressed his gratitude.

I would like to thank everyone for making my election to the Poker Hall of Fame possible. It was a very emotional day for me when I got the news. I consider this the highest honor a poker player can receive next to winning the Main Event of the WSOP.

Thank you so much, this is wonderful news. You work so hard, you put so much time in that you want and hope it will be recognized. This is something my grandkids will talk about. It’s awesome, baby, thank you.

In order to be eligible for the Hall of Fame, a player must be at least 40 years old. Nguyen at 50, and MyEvoy at 68, are part of the old school of poker, and have been playing way before it was considered cool or hip. As the game has evolved, so has their relevance: McEvoy has final tabled a slew of smaller tournaments but has only a few notable cashes in the last five years. Nguyen has fared slightly better, winning several smaller titles, the Players Championship in 2008 and finishing runner-up at last year’s WSOP Event #24 – $5,000 Omaha Hi/Lo. Despite this, some would say the game has passed him by.

And in a way they’d be right. But let’s not forget that if it weren’t for pioneers like McEvoy and Nguyen, the game wouldn’t have become as celebrated as it is today. McEvoy, who started playing poker in his 30s after being fired from his accounting job, is an embodiment of the poker player’s mind. His analytical, mathematical approach to the game served as an inspiration to today’s top players, who employ their own highly analytical playing style.

On the other hand, Nguyen is more of a feel player. Known for his versatile playing style, table talk, unique fashion sense and playfully belligerent personality, Nguyen is a highly recognizable figure who could literally talk others into making bad decisions. And let’s not forget that he’s probably won most of his tournament titles while under the influence of alcohol – how many young guns can claim that?

Nguyen and McEvoy are both WSOP Main Event winners. McEvoy won the title in 1983, Nguyen in 1998. Congratulations to both of you.