“Stake Me to Play” to offer staking, coaching and seminars to promising young poker players. 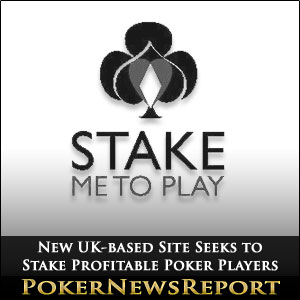 Stake Me to Play to offer staking, coaching and seminars to promising young poker players.

A new UK-based poker site, entitled Stake Me to Play, will be launching this Friday. The site will be offering talented young players and seasoned grinders the opportunity to play on someone else’s dime. In turn the site will receive a portion of the player’s revenue.

Although not confirmed, it appears that players will be required to fork over 60% of their winnings, which compared to industry standards is quite favorable.

Online poker staking is nothing new. The 2+2 forums are littered with posts from players looking for a stake. Shrewd businessmen have made thousands, if not millions, staking profitable poker players. Even the pros usually take pieces of one another.

But Stake Me to Play seeks to do things a bit differently. In at attempt to help players improve their game, the site will be offering them one-on-one coaching sessions, free seminars, phone support, subscriptions to the world’s top training sites and access to the site’s luxurious base of operations in Essex. The facility is a 1250 sq-ft loft and features a poker table, pool table, leisure areas and a lockdown room.

Also included is a guaranteed monthly income. Although the exact amount has not been revealed, we assume it will be enough to cover a player’s basic expenses.

In addition, players who perform exceedingly well will be rewarded with bonuses, trips and access to the company’s vehicles.

Besides the rumored profit splits, no other details regarding makeup, play amount and criteria have been revealed. These are questions players will want to know the answers to before signing up.

Based on the information listed on the site, it can be inferred that Stake Me to Play will only be accepting highly profitable players seeking to take their game to the next level.

As part of its grand opening, Stake Me to Play will be hosting an exclusive seminar with mental game coach Jared Tendler on the 13th, a launch party on the 16th and an exclusive freeroll tournament at Aspers Casino, also on the 16th.

Whether Stake Me to Play will gather enough horses to run a profitable stable is yet to be seen, but given its attractive incentives program and state of the art poker hub, it will likely attract a slew of profitable grinders.