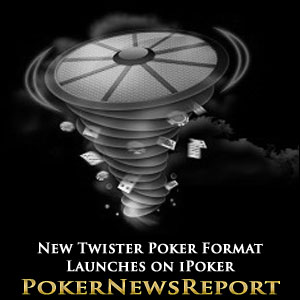 The iPoker’s new lottery poker hybrid is spreading like wildfire. After launching on Everest Poker and BetClic on January 17th, Twister Poker has made its way to two more iPoker skins – Paddy Power and William Hill.

Twister Poker is a unique gaming format that pits three players against one another in a traditional sit and go setting. The “twist”? Players do not know what they’re competing for until after the game begins. First place payouts range from a relatively paltry two times the buy-in all the way up to a staggering 1000x.

The experimental format is also featured on Poker770, as well as Betfred, Expekt and PokerPlex24. It is currently unknown just how many of iPoker’s numerous skins will eventually feature Twister Poker.

In-game support of the new game format has been added to both Paddy Power and William Hill, although to date, the format is not being promoted on their respective sites. Twister Poker mimics Winamax’s Expresso variant, which also rewards players with varying first-place rewards.

Twister Poker is clearly more of a gambler’s game than it is a game of skill, evident by its super-turbo structure and shootout style of gameplay. The lottery style format is a natural extension of the one first offered by PokerStars.

Back in May 2013, Stars introduced its Golden SNGs as part of its 100 billionth hand promo. Unlike Twister Poker, Golden SNGs applied to all sit and go formats, with the prize pool of a randomly selected table increased by a factor of 2x, 4x or 10x. Twister Poker participants, on the other hand, could see 50% of their buy-in absorbed by the site if their table is selected as a 2x table.

Sadly, in true lottery fashion, 75% of the time players will only be playing for 2x the buy-in, whereas 200x and 1000x prize pools will only trigger one out of every 20000 games. Thus, expect professional sng grinders to stray away from Twister Poker, as the lower rake (7%) is not nearly enough to compensate for the decreased value.

In the end Twister Poker is a novel concept, bound to attract gamblers, but will likely turn-off the majority of poker players that rely on their skill edge to make money.