Dusk till Dawn once again plays host to the UK and Ireland Poker Tour, where the prize guarantee for the £1,100 buy-in Main Event is a staggering £1,000,000. 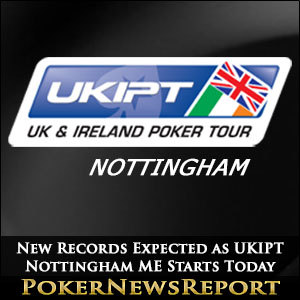 Dusk till Dawn once again plays host to the UK and Ireland Poker Tour, where the prize guarantee for the £1,100 buy-in Main Event is a staggering £1,000,000.

Record numbers are expected to flock to the Dusk till Dawn poker club over the next few days for a share of the £1 million guaranteed prize pool for the UKIPT Nottingham Main Event and for the opportunity to play with many of the Stars who will be in attendance.

According to a post made on DTD owner Rob Yong´s Facebook page last night, 650 players have already registered for the Main Event and 100 more seats are available through live satellites at the club. Add the online satellites still to run on PokerStars, and direct buy-ins, and it is likely that more than 1,000 unique players will take part in the tournament.

£1 Million Guarantee Likely to be Smashed

In addition to the 1,000 unique participants Rob Yong is aiming for (the previous records were 860 players in Galway and 747 in London), the £1 million guaranteed UKIPT Nottingham is also a single re-entry event – so players that bust out during today´s Day 1A can re-enter on Thursday (Day 1B) or Friday (Day 1C), and players that bust out on Thursday can re-enter on Friday.

Many Stars Already Confirmed for Nottingham

As is usual for PokerStars-sponsored events, the UKIPT Nottingham will be attended by many of the site´s sponsored professionals. Dual EPT winner Vicky Coren and Triple Crown winner Jake Cody have already been in action in the UKIPT High Rollers Event, alongside Chris Moneymaker, Sam Trickett and former UKIPT Champions Max Silver and Ludovic Geilich.

Coren and Cody have already chosen to play Day 1A of the UKIPT Nottingham Main Event, while Christophe de Meulder and Sam Grafton will be among the players joining Chris Moneymaker at the tables on Thursday. Liv Boeree and Fatima De Melo are confirmed to be present for Friday´s action, along with a massive contingent from Ireland which includes Wes Farrell, Rowan van Embden and Big Mick Graydon.

Plenty of Side Events also Scheduled

Alongside the UKIPT High Rollers and Main Event, there is plenty of action to keep visitors to Nottingham happy this weekend. The feature side event is the £330.00 buy-in Notts Cup (starts Friday) which has a £100,000 guaranteed prize pool, while players kicking their heels on Sunday could do worse than get involved in the £110.00 buy-in EPT Edition Deepstack event, which has a £20,000 guaranteed prize pool and a UKIPT Marbella Main Event package added for the winner.

Players who cannot make it to Nottingham for this week´s festivities should make a note in their diary´s for the forthcoming UKIPT Series at London´s Hippodrome Casino (May 23-25) where the £250.00 buy-in Main Event is a Pot Limit Omaha tournaments; and, looking further ahead, the UKIPT Marbella gets underway on June 14th at the H10 Andalucía Plaza in Puerto Banus.