New Poker Network to Debut in U.S. in December

The Poker Entertainment Network (PEN) has announced a December launch that will bring poker programming into the living rooms of U.S. poker fans 24/7. 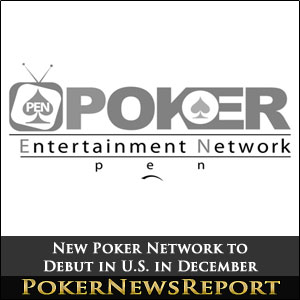 The Poker Entertainment Network (PEN) has announced a December launch that will bring poker programming into the living rooms of U.S. poker fans 24/7.

Also available in Canada, PEN is touting its round-the-clock televised poker offerings as the first of its kind to North American viewers. Agreements with satellite, broadband and cable providers will permit millions of homes to receive non-stop poker-related television shows that aim to appeal to players who are both casual or passionate about poker.

Tournament action that viewers have come to love over the years such as that provided on broadcasts of the World Series of Poker and Heartland Poker Tour will be part of the regular programming at PEN. But players can expect much more in the form of original programming such as poker-themed reality shows, documentaries, films, and news devoted to live and online poker.

PEN promises to showcase the reasons why millions of players are attracted to the game of poker. In a high-powered format never before seen, Pen programming aims to celebrate the poker lifestyle and allow viewers to become insiders in a world that many have to this point only watched from afar.

Poker fans can expect to see compelling coverage of their favorite pro players. They will be tuned in and able to experience the thrills of poker, along with some of the heartaches, such as seeing an unfavorable river card that can derail every player’s dream of winning a poker championship.

As online poker legalization begins to take form and spread throughout the U.S., players and fans will now seemingly have more options when it comes to watching poker-related television shows. Another new broadcast, Poker Night in America, is set to debut in early 2014 and that show also promises to televise poker in an engaging and riveting way that has not yet been seen by viewers at home.

But PEN’s round-the-clock coverage will likely appeal to many players who crave to know and understand more about the poker industry. PEN advises fans to contact their cable television provider and request that the new network be included in their programming package.