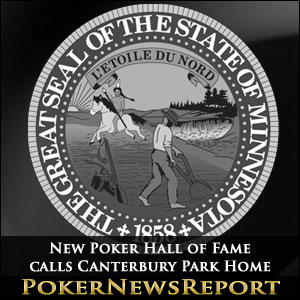 In a press release today, Michael Hochman, Senior Director of Casino Operations said that the Hall will honor Minnesota poker players and those that have played a key role in the development of poker in the state.

Minnesota is not known as a major poker destination. The state is home to nine poker rooms of which Canterbury Park Racetrack and Card Casino is the largest. In late 2012, the state legislature changed the rules concerning poker in the state. The law allowed card rooms to increase the number of tables to 80 (up from 50) and to exceed the table limit once a year for tournament events lasting no longer than fourteen days. The amount of bets allowed was also increased. Other states, like Colorado and Florida, previously gradually changed the rules governing poker rooms which resulted in the growth of the states poker industry. The opening of the Poker Hall of Fame could be in anticipation of future changes or as way of showing the value of more favorable legislation.

The members of the Poker Hall of Fame will be chosen by a board made up of poker media, poker players and industry professionals. The board will announced the first group of inductees in a special ceremony on October 4.

Two well know Minnesota players would seem to be no-brainers as members of the inaugural class.

“Minneapolis” Jim Meehan is a lawyer turned poker pro. Meehan is known for his outspoken, often critical, table talk. Meehan has one WSOP bracket and 19 WSOP cashes as part of his official live tournament winnings of $1.3 million. “Minneapolis” Jim trademark, other than his non-stop chatter, was his usual beverage of choice; Heineken and an unlit cigarette.

Lyle Berman is the safest bet for induction into the Hall of Fame. In addition to be the co-founder of Grand Casinos, a high stake cash game player, and contributor to Doyle Brunson’s Super System 2, Berman serves as the Chairman of the Board of the World Poker Tour and his Lakes Entertainment Inc. was instrumental in the WPT launch.