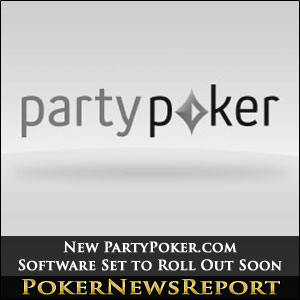 An inside source at bwin.party revealed that PartyPoker.com will roll out its new, casual player centric client “very soon.” Originally slated for release in the spring, the new software will implement a myriad of new social features that fall in line with PartyPoker’s strategy to reinvent itself with the recreational user in mind.

Once the biggest poker site in the world, PartyPoker’s has since fallen on hard times. In 2006, the Unlawful Internet Gambling Enforcement Act (UIGEA) forced the publicly traded company out of US markets. Then, in 2011 PartyGaming merged with bwin to form bwin.party. Since then, things have only gotten worse for PartyPoker. As of the time of this writing, it has fallen behind 888Poker to fifth place in the online poker rankings report. Obviously, a change in strategy was in order.

And that’s exactly what bwin.party did. Over the course of the past year, the company has changed its software development methodology to Agile, restructured its IT staff, shifted its focus to one that values quality over quantity and began exploring regulated and soon to be regulated markets. And now, as revealed by its new poker client, it is rebranding PartyPoker as a fun, casual place to play poker.

CEO Norbert Teufelberger has confirmed that the new software will launch within two weeks.

Here’s what we know about the new poker client:

Players will be allowed to rank each other based on skill level. In theory this will balance the playing field, but in execution seems highly exploitable. Socializing with other players will be encouraged and made more fun. Players will be able to climb an achievements ladder, not unlike those found in video games.

Other noteworthy features include a re-branded poker table, a simpler interface and a 1-click lobby that acts as a sort of customizable dashboard. From it, players can organize the games they are most likely to participate in.

In addition, PartyPoker is placing a higher emphasis on mobile devices. Teufelberger is confident in PartyPoker’s mobile strategy, and is confident that it can “win back market share.”

A television ad is set to go together with the launch.

In other news, bwin.party is on target to launch operations in Atlantic City on New Jersey’s go-live date of November 26, 2013. They are already in the process of setting up software in the Borgata, and are at least planning to set up operations in Nevada and other states that have passed online poker legislation.